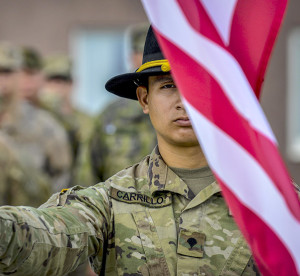 A U.S. Army soldier holds the U.S. flag during a closing ceremony at Tapa Training Base, Estonia, June 21, 2016. U.S. forces in Europe participated in Saber Strike 16; a long-standing, U.S. Joint Chiefs of Staff-directed, U.S. Army Europe-led cooperative-training exercise, which has been conducted annually since 2010. This year’s exercise focused on promoting interoperability with allies and regional partners. The United States has enduring interests in supporting peace and prosperity in Europe and bolstering the strength and vitality of NATO, which is critical to global security.

More than 200 NATO service members gathered at Tapa Training Base, Estonia, for the closing ceremony of Saber Strike 16 June 21.

U.S. service members were only one component of the large-scale theater security-cooperation exercise that began June 12.

The exercise was held in multiple locations throughout Estonia, Latvia and Lithuania, facilitated cooperation among NATO allies and improved joint-operational capability across a range of missions to prepare the 13 participating nations to support multinational-contingency operations around the world.

During the ceremony, leaders spoke about the efforts put forth by all who participated and thanked one another for the unified partnership that made the exercise a success.

“It is great to see all of you service members from so many different nations,” said Taavi Roivas, Estonian prime minister. “It is also great to see that all of our nations are working together as one and that Saber Strike 16 was a great success.”

“The most important thing that’s built during these exercises are the trusted relationships,” said Ortner. “You can’t schedule, plan or order that. Those trusted relationships are what make us truly strong as an alliance and also as a bilateral team with whatever nation we are working with.”

SbS16 also featured the integration of U.S. close-air support with allied and partner-nation ground forces and testing of U.S. air and naval deployment of forces and equipment.

“The most impressive part of the exercise was the integration of the B-52 strategic bomber in a close-air support role as well as the A-10s that were used in [field training exercises] as well as live fires,” said Ortner. “For the first time in 32 years the A-10s did an austere landing along a highway, here in Estonia.”

SbS 16 went off without a hitch because of the hard work of partnered nations that sometimes endured obstacles to accomplish the mission.

“Shared sacrifice has a benefit all of its own,” said Ortner. “When you have [service members] out there living together, sweating, stressed out, getting rained on]and living through those conditions, real unity and trust are built.”

Exercise Saber Strike is just one way the U.S. and allies improve the relationships built over the past 70 years, and continues to provide strategic access critical to meet the NATO commitment to respond to threats against allies and partners.