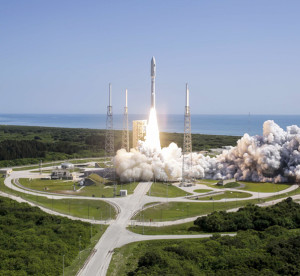 MUOS-5 is an on-orbit spare and the final satellite in the five-satellite MUOS constellation. The satellite is successfully responding to commands from a Navy and Lockheed Martin team operating MUOS-5 from the Naval Satellite Operations Center, Naval Base Ventura County, Point Mugu, Calif.

“With this marking the last launch of the Navy’s MUOS system, I want to thank the entire MUOS team for all the hard work that goes into making these launches successful and the ongoing efforts of those who support the end-to-end integration of the MUOS system around the world,” said Rear Adm. Christian Becker, Program Executive Officer Space Systems. “We are looking forward to continued collaboration with the other services and our industry partners as we mature the full system and deliver it for operational use.”

MUOS is an Internet Protocol-based system designed to provide improved communications capabilities to users around the world, regardless of where they are in relation to a satellite, and will provide greater than 10 times the bandwidth capacity compared with the current ultra-high frequency (UHF) constellation.

The MUOS-5 satellite is now in transit toward its geosynchronous orbit location, where it will then deploy its solar arrays and antennas.

“MUOS-5 will be transitioning over the next nine days to reach its test slot 22,000 miles above the earth in a geosynchronous orbit,” said Cmdr. Jason Pratt, principal assistant program manager of MUOS. “Once it has reached its location and deployed its arrays and antennas, on-orbit testing of the satellite will begin.”

“Looking forward, we are continuing to focus efforts on transitioning to the WCDMA capability of MUOS,” said Jarratt Mowery, director of end-to-end system integration. “The system first demonstrated WCDMA voice and data calls via the Army’s Manpack radios in 2013, and we’ve since conducted testing and training with each of the various service branches. We’re excited to keep working with end-users to ultimately provide warfighters the ability to talk, text and share data around the world using the MUOS WCDMA system.”

The MUOS constellation and associated network will extend narrowband communications availability well past 2025.