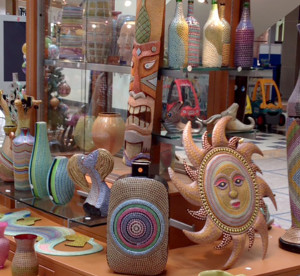 Army veteran Greg Mullen has created animal figures, Southwestern sun faces, vases, as well as a life-sized suit of armor and a coffee table with a “dot” art technique he developed to help him cope with post-traumatic stress disorder. While a small item takes him a half day to fill with about 400 dot patterns, his prized coffee table took three months to complete, with at least 50,000 layered dots.

When Army veteran Greg Mullen developed symptoms of post-traumatic stress disorder while stationed in the Middle East during the first Gulf War, his symptoms from nonstop anti-missile blasts were severe enough after a six-month deployment for him to transition out of his 12-year military career.

The disorder later would later become commonly known as PTSD, a signature wound of the Iraq and Afghanistan wars. Mullen’s doctor told him he had a personality disorder and prescribed drug therapy.

But the medication did not help his severe anxiety, panic and migraines, Mullen said.

Mullen, a former material control and accounting specialist from Greensboro, North Carolina, didn’t know where to turn for help.

Self-expression through art
With assistance provided by a psychologist, Mullen realized he had an aptitude for art. He found himself doodling on paper one day, making small circles within circles, within more circles. The more he repeated the pattern, Mullen said, the less anxious he became.

Little did Mullen know as he doodled those patterns that his life would dramatically change for the better. Gradually, as he transitioned from pencil and paper to paint, overlaying a series of dots onto objects, he felt the entrapment of PTSD’s chains begin to fall away.

“It gives me peace of mind and calms me down,” Mullen said of his art.

“It gives him a chance to take a breath, when most people might go into panic,” Mullen’s husband, Edward, said. “He just immerses himself in it. When you’re concentrating on creating dots, you’re not thinking about much else.”

Objets d’ dot art
Edward began collecting items made from a variety of materials such as wood, ceramic and metal from thrift stores, flea markets and garage sales for his husband to refinish and decorate with lavishly colorful dot patterns.

With no project too small or too large to try, a collection began, born from what Mullen calls “layered-dot artwork.”

Edward said his husband does not plan out or use templates when he creates his close-together dot patterns. “When he [paints] the dots, it just takes him where it takes him,” he added.

Mullen has created animal figures, Southwestern sun faces and vases. He also has produced a life-sized suit of armor, and a 4-by-4-foot coffee table. While a small item takes him a half a day to fill with about 400 dot patterns, Edward said, Mullen’s prized coffee table took three months to complete with at least 50,000 layered dots.

Mullen has donated a mother-and-child figure to a major children’s charity and a model biplane to a veteran service organization — both for auctions to raise money for their causes.

Helping veterans help themselves
As his collection of art grew, Mullen began showing his wares at military installations from the East Coast to Colorado, where he is able to interact with other veterans and show those who also suffer from PTSD symptoms that an alternative to medicine might exist for them, too. He receives emails from inspired veterans who found coping skills through activities such as yoga, meditation and art.

His husband’s art displays at military bases “gets him out there in front of other people who need to hear his story from him,” Edward said. “There are other veterans who are going through the same thing.”