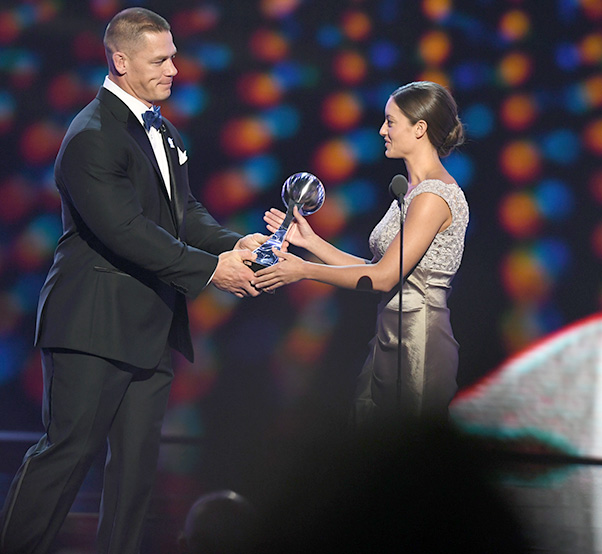 Sgt. Elizabeth Marks does not swim to win medals, reap accolades, or even earn a spot on the U.S. Paralympic Team.

“I don’t chase medals,” Marks said. “I chase experiences. I don’t believe in stepping on a block or training and thinking about an object. I train thinking about friends that I’ve impacted along the way and strangers that I’ve gotten to impact along the way. That’s the real prize. That’s what it’s all about for me.”

Marks recently won four gold medals at the 2016 Invictus Games and has earned a berth in the 2016 Rio Paralympic Games. On Wednesday, July 13, she was honored at the 2016 ESPY awards before a national television audience with a Pat Tillman Award for Service.

Marks sustained bilateral hip injuries in 2010 while serving as a combat medic in Iraq, and struggles with vision and hearing difficulties immediately after swimming races. She swims, she said, to help others realize that they too can overcome adversity.

“I wanted to stay active duty because I wanted other people to know, when they got injured, that they had options,” Marks said. “I think I’ve been given a unique perspective in most things in life. I just feel lucky every day. I feel like I wake up and I’m glad I have that day, and no matter what happens, if I swim the world’s slowest time, I would have been grateful to be in the pool.”

Marks realizes what a difference one day can make.

“Last night was a whirlwind,” she said of her ESPY Awards experience. “It was beautiful and humbling. My favorite part was getting to meet Marie (Tillman) and learn more about the Pat Tillman Foundation. 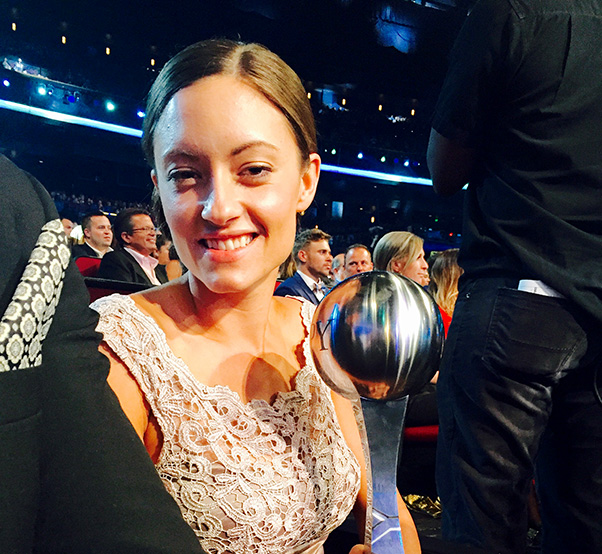 Paralympic swimmer Sgt. Elizabeth Marks of the U.S. Army World Class Athlete Program displays her Pat Tillman Award for Service trophy after returning to her seat at the ESPY Awards on July 13 at the Microsoft Theater in Los Angeles.

The announcement that Marks had made the 2016 U.S. Paralympic Team came on the four-year anniversary of her being named fit for active duty by a medical review board.

“I had to fight very hard to be found fit for duty to stay in the Army,” Marks said when she was officially named to Team USA. “I fought very, very hard for it.”

All of her achievements — the paralympics announcement, the fitness active duty anniversary, her Invictus Games victories and her Pat Tillman award — are the culmination of four years of hard work. Nevertheless, Marks is eager to direct the attention away from herself.

“My credit goes to my love for the Army, as well as my brothers and sisters that stand beside me and behind me the whole way,” Marks said. “They have supported me wholeheartedly through the entire process from day one when I did my first competition and learned that I loved swimming until I competed in the Paralympic Trials.”

At the ESPY Awards, Marks’ message was received loudly and clearly. 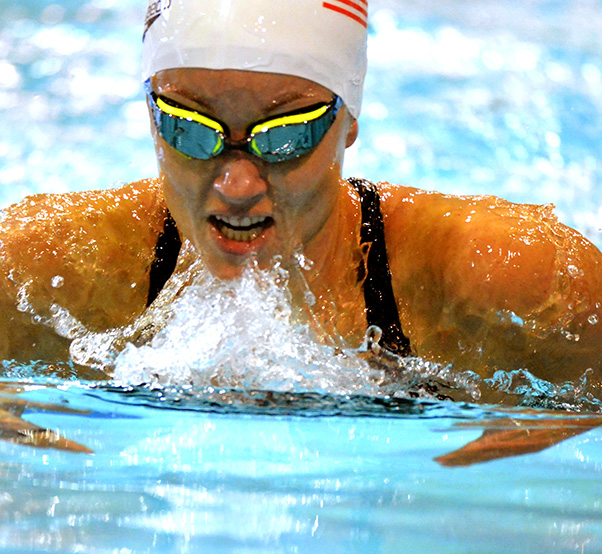 “I will do everything I can to bring home the gold from Rio, and it will be because of you. We did this, and anything else from here on forward I will consider a testament to your craze, your love and your affection. And I will leave you with this: if you’re struggling, if you’re hurting — whether it’s mental or emotional — if ever you think you’re alone, you’re not. And if ever you think no one cares, I do. Please come join me behind the blocks.”

Marks received a standing ovation after her speech, but just prior to receiving the award, she had expressed doubts that she was worthy of it.
“I was in shock when I received the news, and I called my Dad because I couldn’t really process it,” she recalled before actually receiving the trophy.

“I said, ‘Dad, I won an ESPY and it’s the Pat Tillman Award. He started ranting and raving and said, ‘Do you know what that is, Baby?’ I knew who Pat Tillman was, but I didn’t know what ESPYS were.”

Her father, James Marks, who turned 66 on the eve of the 2016 ESPY Awards show, served in the Marine Corps during the Vietnam War.

“He said to me, ‘I’m always proud of you, baby girl, and I always will be,” Elizabeth said. “He said, ‘Good job.’ My Dad is the kind of man who I could make him a snowman out of mud and bring it to him and he would be just as excited as me winning a gold medal.”

Marks admitted beforehand that she had little idea what to expect during one of the most exciting nights of her life. 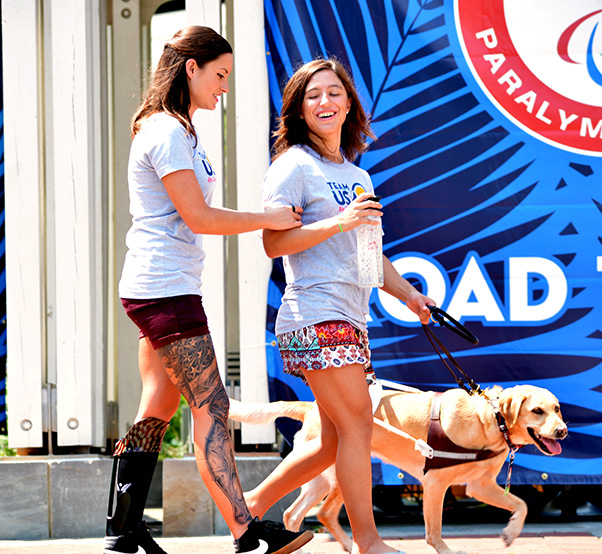 “I don’t know anything about other athletes,” she said. “I know almost nothing about sports. I think that it helps that people are people — we’re all human beings — and I think having genuine encounters is very important.”

At the Microsoft Theater in Los Angeles, Marks found that she felt right at home with hundreds of the greatest athletes in America.

“All of the athletes were extremely kind. ESPN did a fantastic job of welcoming me and taking care of me and helping me deliver my message,” she said. “It was nice that they received it as well as they did.”

Marks said afterwards that she was honored to be associated with the Pat Tillman Award and all that it represents.

“The Pat Tillman Fund does such amazing things for people — scholarships, support, everything,” she said. “Just to be considered for the Pat Tillman Award, compared to the people who have received it in the past, was just a huge honor.”

Marks is the first active-duty Soldier to receive the prestigious award, but Marks said she is far from being finished.

“Every step along the way has been unexpected and sometimes hard, sometimes beautiful,” she said. “I’m just grateful for all of it. What it led to is just a result of trying hard, caring about what I was doing, and wanting to do it for my military family.”

Marks wishes everyone could receive the same amount of support she has. 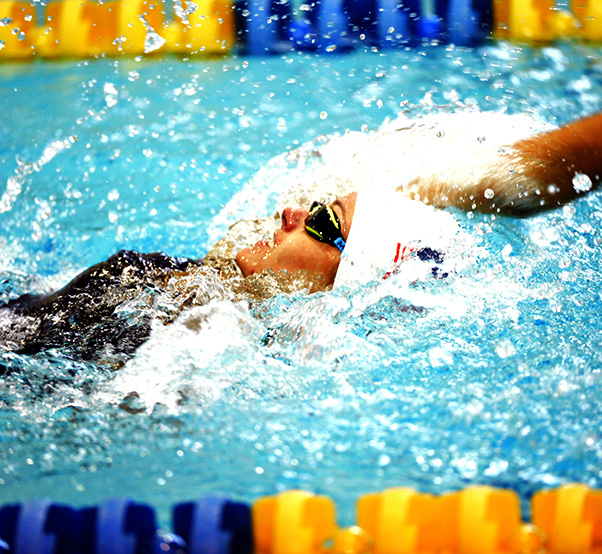 “There’s too many people that get stuck after they get hurt, whether it’s mentally, physically or emotionally hurt, and I think the most tragic thing that can happen is for one of our brothers or sisters to get left behind,” said Marks, who wears an Ideo — a prosthetic for her non-sensation left leg.

“I think that it’s our responsibility to continue lifting our brothers and sisters up until not one person is left behind, until the statistic of suicide is reduced, until everyone knows that there’s a family once you become ill, sick or injured — mentally or physically. There is a new chapter to be opened and we welcome them.”

At some point, Marks plans to continue giving back in another way. She would love to coach Paralympians when she’s finished competing. “My injury was in April of 2010, so technically I’m only six years old by Paralympic standards.”

For now, Marks is ready to go to Rio de Janeiro and take on the world.

“I feel ready and I feel excited,” she concluded. “I’m ready to do it.” 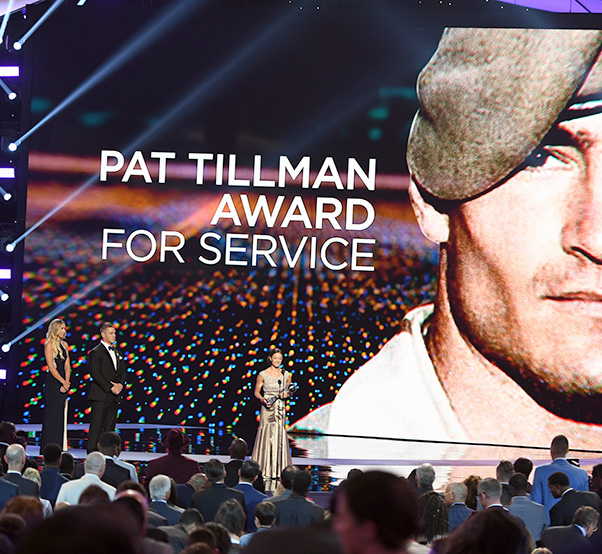