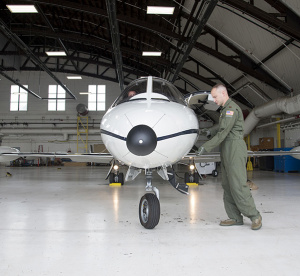 Maj. Brian Jones, 458th Assistant Chief of Training, works on pre-flight checks July 6, 2016, at Scott Air Force Base, Ill. The visual inspection or walk around is done by the pilot as the final airworthiness check.

From the F-15 Strike Eagle to the X-51 Waverider, every aircraft in the U.S. Air Force plays a part in the mission to Fly, Fight, and Win.

That includes a small fleet of C-21 aircraft located at Scott Air Force Base, Ill.

The C-21 is a twin turbofan-engine aircraft used for cargo, passenger and medical evacuation airlift. Aircrews operate the C-21 in support of three primary missions, with distinguished visitor transport as the most commonly executed mission. The DV support airlift, although a commonly overlooked mission, remains a high priority for Air Force leaders.

“There have been arguments made as to why our generals do not fly commercial,” said 1st Lt. Jeffery Leicy, 458th Airlift Squadron C-21 pilot. “It takes time to get to the airport, go through security, wait for the flight, wait for your bags, and even wait on other people. That’s time that they should be spending making key Air Force decisions.”

Lt. Col. Kimberly Welter, 458th Airlift Squadron commander, explained that generals and DVs typically have numerous places to travel, and small time frames in which to get there.

This particular mission also gives pilots the opportunity to meet the Air Force leaders who make the decisions that affect them and their career.

Leicy said, “You read about these generals in the Air Force Times and see them on the news, and you tend to forget that they’re just people.

“When flying them, you get to spend two to three hours with them. It’s just nice to see that they’re just people; very, very important people.”

The 458th at Scott AFB is not only responsible for flying DVs, but is also home to the only formal training unit for the C-21.

The training unit originated at Keesler Air Force Base, Miss., under the Air Education and Training Command. In 2007, due to the downsizing efforts, the Air Force moved the C-21 training unit to Scott.

Once personnel have completed their undergraduate pilot training, they go through a six week training for their specific aircraft.

C-21 pilot trainees spend a total of three weeks in Dallas practicing in a simulator. In the simulator, they have a chance to practice handling single-engine and other emergency procedures in addition to the basics of flying the aircraft.

After trainees complete simulator training, they travel to Scott AFB for an additional three weeks, during which they fly the actual aircraft. Students are encouraged to work together and use teamwork to plan flights.

“We normally fly our training missions with an instructor and two other students,” said Leicy. “The planning is completely dependent on the students and the teamwork is by far my favorite part of the training.”

Welter said, “I enjoy the fact that we have such young pilots who are given large amounts of responsibility. You wouldn’t typically throw a 23-24 year-old in charge of a $3-4 million aircraft outside of the military. They are very good at their jobs and I’m proud of them. It’s a tremendous amount of responsibility, but we have faith in our training system and our pilots.”

The C-21 also supports the aeromedical evacuation mission in transporting ambulatory patients around the continental U.S.

Although it’s primarily used for ambulatory patients who can walk, the C-21 also has the capability to hold a spectrum unit. A spectrum unit includes a large litter and electrical source for any variation of life support a patient may require.

“When it comes to aeromedical evacuation, it’s all about the support we provide,” Welter said.