Vietnam Hero
Carter said that for 50 years Kettles has been content to let his story reside mainly in the memories of fellow soldiers like Roland Sheck and Dewey Smith, who were in the audience today.

“And it would have stayed that way if his wife Ann hadn’t prompted him to tell the story to William Villano, a dedicated volunteer with the Library of Congress’s Veteran’s History Project who is helping preserve and pass on these vital stories for the generations to follow,” Carter said.

Defense Secretary Ash Carter claps during the Hall of Heroes induction ceremony for retired Army Lt. Col. Charles Kettles at the Pentagon, July 19, 2016. Kettles received the Medal of Honor for his heroic actions in the Vietnam War during a White House ceremony, July 18, 2016.

Belated honor
“When this remarkable story was brought to my attention last August, I agreed that it was important to properly recognize his actions, and asked Congress to pass special legislation allowing this belated honor,” Carter said.

More than 58,000 names are inscribed in black granite on the Vietnam Veterans’ Memorial, every name representing a great loss for a family and the nation, the secretary noted.

“But as President Obama noted yesterday, because of the valor of then-Major Kettles and his crew on May 15, 1967, he added, “there are 44 names that are not on that wall.”

That day, Carter said, when Kettles and his crew first approached the hot landing zone on the Song Tra Cau riverbed in their H-1 Huey helicopter, they saw an entrenched enemy in battalion force intensely firing on outnumbered American troops below. Yet they landed and stayed under fire long enough to offload reinforcements and supplies and take on the wounded.

Kettles piloted the damaged helicopter back to base, full of holes and leaking fuel, then jumped into another Huey to return to the landing zone leading six more helicopters in, exposed to heavy fire, to exfiltrate the force, the secretary said.

Duty, honor, country
Afterward, Kettles went back again, Carter said, this time for eight soldiers pinned down on the ground under continuous fire. Again he landed, retrieving the squad. And despite being hit by a mortar round and machine-gun fire that damaged his tail boom and a main rotor blade and shattered both windshields and the chin bubble, he got into the air and returned all to safety.

“What motivated Kettles that day was duty, honor and country,” Carter said, “and the deeply held conviction that we will never, ever, leave a soldier, sailor, airman, or Marine behind.

For many American service members in harm’s way the first indication that they would see their families again was the sound of helicopter blades beating against the sky, the secretary said, adding, “Without the valor of the helicopter pilots in Vietnam, more names would have been added to the wall across the river.” 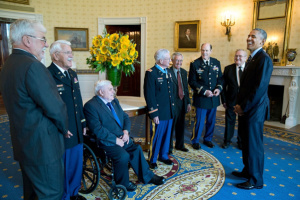 President Barack Obama talks with retired Army Lt. Col. Charles Kettles, center, and his guests, former brothers-in-arms from Vietnam, in the Blue Room following the Medal of Honor ceremony for Kettles at the White House, July 18, 2016. Then-Major Kettles distinguished himself in combat operations near Duc Pho, Republic of Vietnam, on May 15, 1967, and is credited with saving the lives of 40 soldiers and four of his own crew members.

Supporting war fighters
Without the pilots and crews who continue the watch in Black Hawks, Ospreys, Chinooks, Lakotas, Pave Hawks, Super Stallions, Cobras, Apaches and more, over Afghanistan, Iraq and elsewhere, he said, many more would have been lost over the past 15 years of war.

“Today as we honor Lieutenant Colonel Kettles, we honor the many other pilots and crews who have taken great risks and made great sacrifices to support the warfighter on the ground and bring them safely home,” the secretary said.

Kettles never hesitated when the call came, whether it was serving active-duty tours in Korea, Japan and Thailand, or returning from civilian life as a citizen soldier to serve multiple tours in Vietnam, or displaying conspicuous gallantry in the face of enemy fire on the riverbed at Song Tra Cau, he added.

“On behalf of the families of the 44 men you helped save that day, on behalf of the men and women of this Department of Defense, and on behalf of a deeply grateful nation,” Carter told Kettles, “I congratulate you on this well-deserved honor, and I thank you for your service to the United States of America.”