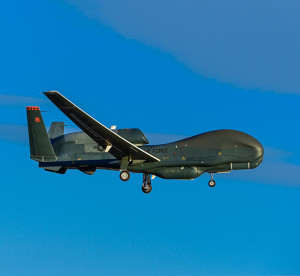 Global Hawks operate at altitudes up to 60,000 feet for more than 30 hours, surveying thousands of square miles on a single mission. Global Hawk carries a variety of sensor payloads that allow military commanders to gather near real-time imagery and use radar to detect moving or stationary targets on the ground. The system also provides airborne communications and information sharing capabilities to military units in harsh environments.

“Global Hawk has set endurance records and displayed an unmatched record of safety while reducing per hour flight costs to half the cost of the manned alternative,” said Mick Jaggers, vice president and program manager, Global Hawk, Northrop Grumman. “This milestone is especially meaningful as it comes just before the 15th anniversary of Global Hawk’s first deployment into the theater of operations following the tragic events of 9/11. We expect Global Hawk to continue to provide indispensable ISR information to our warfighters.”