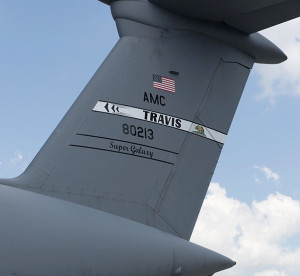 A C-5M Space Cargo Modified (SCM) Super Galaxy, sits on the flight line July 21, 2016, at Dover Air Force Base, Del. This C-5 has just completed a Major Isochronal Inspection and is ready to return to its home station, Travis AFB, Calif.

Dover Air Force Base, Del., is home to a fleet of 18 C-5M Super Galaxy intercontinental-range strategic airlifters, the Air Force’s largest transport aircraft. It is also home to the Air Force’s only facility capable of conducting Major Isochronal Inspections on C-5 aircraft.

This C-5M SCM, originally a C-5A model assigned to Travis AFB, Calif., was modified into a C-5C model, one of only two such models ever made. It was modified to carry large cargo, such as satellites. The main difference this C-5 has from all other C-5s, is its lack of a troop compartment and it has different aft doors. Another difference is that it has two places to plug in external power, for both the aircraft and for a payload canister.

This aircraft arrived on May 16, 2016, to undergo the inspection. This is just one reoccurring phase of an eight-year maintenance schedule that all C-5 aircraft undergo, ranging from recurrence and depth: preflight, home-station check, Maintenance Steering Group-3 Minor, MSG-3 Major and Programmed Depot Maintenance. 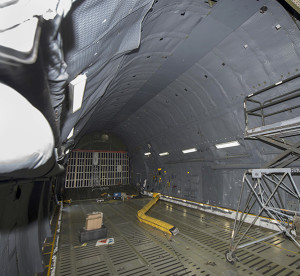 A C-5M Space Cargo Modified (SCM) Super Galaxy’s cargo compartment on the flight line July 21, 2016, at Dover Air Force Base, Del. This C-5 is one of only two that has this configuration.

During an ISO inspection, aircraft maintainers strip down the C-5 looking for any deficiencies, faults, cracks or any other problem in every system of the aircraft. For the Airmen in the ISO Dock, this unique C-5 created a few unique challenges while undergoing maintenance and inspection.

“A bridge had to be built to allow access into the hayloft of the aircraft due to the lack of having the normal troop compartment,” said John Greim, 436th MXS production controller. “ISO personnel brain stormed how to build a bridge and with the use of a B-2 stand prepositioned into the cargo bay we gained access to the hayloft. This had to go through wing safety approval, quality assurance approval, engineering assist and finally maintenance group approval to allow use of the bridge to complete our inspections and repairs.”

“The aircraft has different aft doors than any other C-5,” Greim said. “We had to pre-coordinate with Travis to ensure they sent us a qualified maintainer that could operate the aft doors for reconfiguring of the aircraft for our process.”

The inspection and maintenance is now complete and this C-5 is now ready to return to its home station and continue its mission.