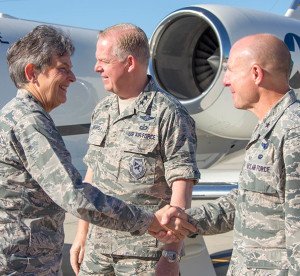 Gen. Ellen M. Pawlikowski, commander of Air Force Materiel Command, arrived at Edwards Air Force Base, Calif., July 20, 2016, to conduct the latest in a series of fact-finding visits to various centers under the AFMC umbrella.

Pawlikowski was joined on her visit by CMSgt. Jason France, AFMC command chief. Their visit placed a special emphasis on gathering and evaluating effective metrics — a means of measuring various data points that reflect the Air Force Test Center’s performance as an organization.

Pawlikowski and her entourage began their itinerary at the AFTC headquarters building where the visiting leaders from AFMC met other test center leaders to include David K. Robertson, AFTC’s executive director and Dr. Kathleen Thome-Diorio, AFTC’s director of staff.

All the AFTC directorates were represented as the AFTC Strategic Plans and Programs Team presented the current and projected statistics on cost, schedules and performance that prove that the test center is making progress towards meeting its goals, according to 1st Lt. Scott C. Dold, AFTC’s junior executive officer.

Such metrics reveal whether resources are being distributed effectively and whether various test community participants are making projections that are both attainable and within budget limitations.

Pawlikowski lauded the test center’s ability to reallocate resources as needed, as well as efforts to spotlight potential issues in the developmental testing phase so that the operational test community and end-user warfighters have effective weapons systems on delivery.

After a brief lunch, Pawlikowski, Harris, Schaefer, and Copeland convened with representatives of the 412th Test Management Group, Special Projects Branch, while France conducted a question-and-answer session with a cross-section of Airmen from units throughout Edwards Air Force Base.  France wanted to address concerns among the enlisted community, including changes to the career advancement and evaluation system, changes in housing compensation for military-to-military spouses, and the pros and cons that Airmen should consider when deciding between the legacy retirement system and the new blended retirement system.

Afterward, AFMC and AFTC leadership visited 45 Airmen from the 412th Aircraft Maintenance Squadron in Hangar 1207 where they expressed gratitude to maintainers of the U.S. Air Force Reserve and Air National Guard who were instrumental in supporting recent test efforts for the ongoing KC-46 program.

In the evening, visiting guests from Headquarters AFMC and senior leaders from throughout Edwards Air Force Base met with an array of civic and community leaders at Harris’ home for an honorary reception for Pawlikowski before her departure.

Pawlikowski’s visit to Edwards AFB was the fifth of six Center Metrics Reviews for 2016.