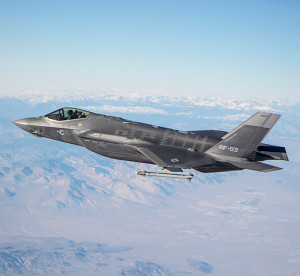 The F-35 Lightning II advanced its combat capability by launching an air-to-air missile and directly hitting a drone over a military test range off the California coast July 28.

Test data and observers confirmed the F-35 identified and targeted the drone with its mission systems sensors, passed the target ‘track’ information to the missile, enabled the pilot to verify targeting information using the high off-boresight capability of the helmet mounted display (HMD) and launched the AIM-9X from the aircraft to engage the target drone.

After launch, the missile successfully acquired the target and followed an intercept flight profile before destroying the drone, achieving the first F-35 Air-to-Air kill or “Boola Boola,” which is the traditional radio call made when a pilot shoots down a drone.

Immediately prior to launching the AIM-9X, LeClair employed an internally carried AIM-120C missile against another target drone. This target was beyond visual range and the AIM-120C was given a successful self-destruct signal right before target impact.

The AIM-9X is a short-range heat-seeking missile with an off-boresight capability for accuracy and features thrust-vectoring controls for increased turn capability.  The F-35 can carry two AIM-9X missiles on its wings.

During previous test shots a self-destruct signal had been sent to the missile prior to it hitting the target.

“It’s been said you don’t really have a fighter until you can actually hit a target and we crossed that threshold with the first air-to-air weapon delivery of an AIM-9X.  This successful test demonstrates the combat capability the F-35 will bring to the U.S. Military and our allies,” said LeClair. “This test represents the culmination of many years of careful planning by combined government and contractor teams.  We want to ensure operators will receive the combat capability they need to execute their mission and return home safely – we cannot compromise or falter in delivering this capability.”

The missile test is part of a weapons delivery accuracy surge being conducted by the F-35 Joint Program Office Test Teams at Edwards Air Force Base, Point Mugu Sea Test Range, Naval Air Weapons Station China Lake, all in California, and White Sands Missile Range in New Mexico.  The focus of the increased weapons testing is to advance 3F software testing, which will provide full warfighting capabilities to the F-35.  Other ordnance being released during surge testing include:  Small Diameter Bombs, Joint Direct Attack Munitions and AIM-120s.

The F-35 is a multi-role, next-generation fighter that combines advanced stealth with speed, agility and a 360-degree view of the battlespace.  The F-35 will form the backbone of air combat superiority for decades to come and replace legacy tactical fighter fleets with dominant air-to-air and air-to-ground capabilities to deter and defeat potential adversaries.