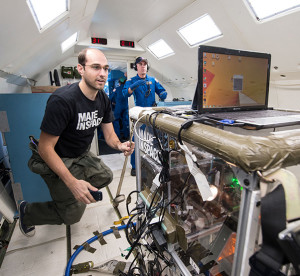 “These selections represent an opportunity for large and small businesses along with academia to demonstrate technologies of interest to NASA in a space-like environment and build flight heritage,” said Robert Yang, Flight Opportunities program executive in STMD. “Having this heritage can enable these technologies to be more readily included in future NASA projects or commercial ventures.”

The second, Demonstration of Vehicle Capability Enhancements and Onboard Research Facilities for Payload Accommodation, focuses on improving or enabling the use of flight vehicles for science research and technology flight test applications.

The selectees’ experiments are expected to include fluids and heat transfer testing, sample retrieval technology, robotics, oxygen generation technology, radiation measurements and testing new facilities for experiments in the relevant environment provided by the flight vehicles.

“The MOJO robot from MIT comes out of a Center Innovation Fund project at the NASA Ames Research Center that was looking at robotic assembly of large structures in space,” said Christopher Baker, Center Innovation Fund program manager in STMD. “In-space assembly can enable large scale vehicles and habitats for human exploration, and very large telescopes for scientific observation. Some of that can be tested on the ground, but you really need to remove gravity from the equation to see how it will work in orbit.”

Of the 13 firms selected for awards, five companies and academic institutions previously received funding from NASA’s Small Business Innovation Research (SBIR) Program. The SBIR is a highly competitive program that encourages domestic small businesses to engage in federal research, and research and development (R&D) with potential for commercialization.

“As demonstrated by this year’s Flight Opportunity awards, the SBIR program creates a pipeline of exciting technologies and R&D that can continue to be matured to higher technology readiness levels through other NASA programs, such as the Flight Opportunities program,” said Jenn Gustetic, SBIR program executive in STMD.

Awards will be made for payload integration and flight costs, as well as limited payload development costs.  Investment in tests that take technologies from the laboratory to a relevant flight environment facilitates technology maturation, validates feasibility and reduces technical risks.  These investments enable infusion of key space technologies into multiple future space missions. The next REDDI call for proposals is planned for the second quarter of fiscal year 2017.

The Flight Opportunities program, part of STMD, is managed at NASA’s Armstrong Flight Research Center at Edwards, California.  NASA’s Ames Research Center at Moffett Field, California, manages the solicitation and selection of technologies to be tested and demonstrated on commercial flight vehicles.