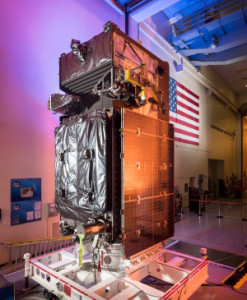 The SBIRS GEO Flight 3 satellite undergoes final preparations at Lockheed Martin. To prepare for its launch, the satellite went through rigorous testing procedures, including thermal vacuum testing at the extreme hot and cold temperatures it will encounter in space.

Lockheed Martin manufactured SBIRS GEO Flight 3 at its Sunnyvale, Calif., facility. For its trip to Florida, the satellite was loaded aboard a C-5 Galaxy aircraft at nearby Moffett Federal Air Field. It will launch aboard a United Launch Alliance Atlas V rocket.

The next SBIRS satellite, GEO Flight 4, is in storage and will undergo final assembly, integration and test operations prior to its planned 2017 launch. SBIRS GEO-5 and GEO-6, which are currently in production, incorporate the new modernized A2100 spacecraft to dramatically reduce costs and cycle times while increasing the potential to incorporate future, modernized sensor suites.