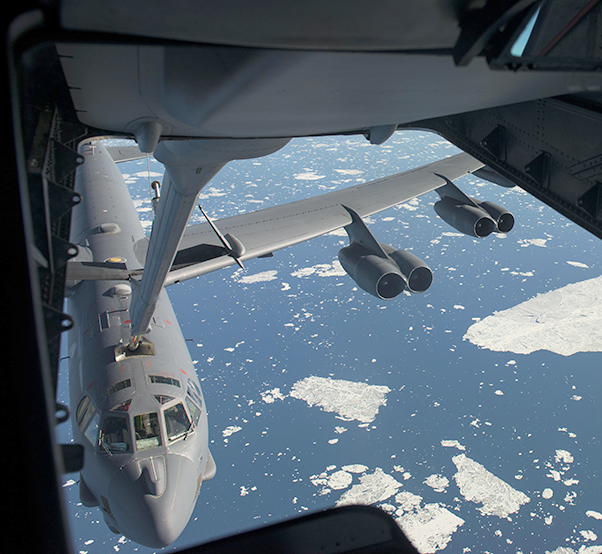 A B-52 Stratofortress from Minot Air Force Base, N.D., receives fuel from a 305th Air Mobility Wing, Joint Base McGuire-Dix-Lakehurst, N.J., during Polar Roar, a strategic deterrence exercise, in the skies near the North Pole, July 31, 2016. The B-52 received 70 thousand pounds of fuel from the KC-10 during the refueling.

Mobility airmen play a vital role in deterrence and stand ready to operate in support of global operations at a moment’s notice. 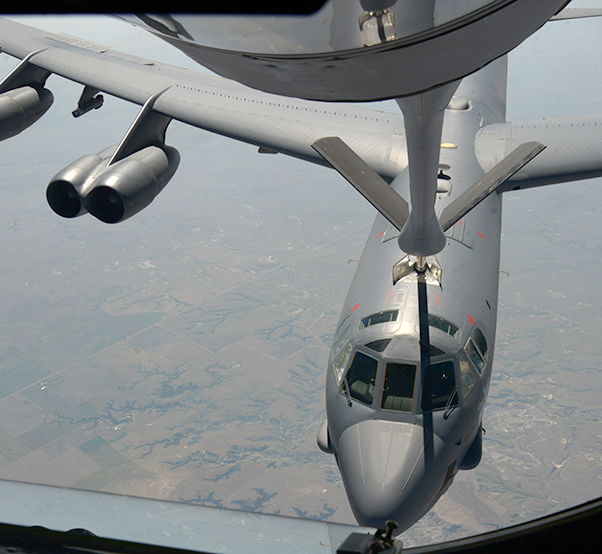 A KC-135 Stratotanker refuels a B-52 Stratofortress, above Minnesota, July 31, 2016. Four of McConnell’s KC-135s assisted in refueling two B-52s to reach Polar Roar. Polar Roar is a mission in the Arctic Circle that demonstrates the ability to provide a flexible and vigilant long-range global-strike capability.

Tankers are critical to U.S. Strategic Command, and Air Mobility Command is the only Air Force command with trained Airmen able to provide and meet their air refueling needs, he said.  For this reason, tanker crews routinely practice bomber refueling during BAAD missions around the globe, during exercises and in day-to-day operations.

“Each KC-10 tanker gave the B-52s roughly 65 to 70,000 pounds of fuel so they could continue on with their part of the overall mission,” said Senior Master Sgt. Mark Barnette, 32nd Air Refueling Squadron boom operator at JB MDL. “We enable aircraft to get anywhere in the world with our refueling capabilities.”

Maj. Matthew Jones, a pilot assigned to the 349th Air Refueling Squadron at McConnell AFB, led a formation of four tankers in off-loading 200,000 pounds of fuel during Polar Roar.

A B-52 Stratofortress from the 2nd Bomb Wing, Barksdale Air Force Base, La. conduct aerial refueling with a KC-135 Stratotanker from the 22nd Air Refueling Wing, McConnell Air Force Base, Kansas, while conducting a non-stop flight from the U.S. to the North and Baltic Seas during the operation POLAR ROAR July 31, 2016. During the operation, the bomber crews strengthened their interoperability with key allies and partners by conducting intercept training with NORAD-assigned Canadian and U.S. fighter aircraft and Portuguese Air Force fighter aircraft assigned to NATO’s Baltic Air Policing mission. The operation demonstrated the ability of the U.S. bomber force to provide a flexible and vigilant long-range global-strike capability, and provide unique and valuable opportunities to train and integrate with allies and partners.

“Tankers are extremely important to STRATCOM’s missions,” said Jones. “(STRATCOM’s) goal is to be anywhere on the globe to show deterrence, but they do not have that capability alone. They need tankers to reach their destination.”

Polar Roar involved three nonstop, simultaneous flights of B-52 and B-2s from the U.S. to the North and Baltic Seas, around the North Pole and over Alaska, and over the Pacific Ocean to Alaska’s Aleutian Islands. Polar Roar helped ensure bomber crews maintain a high state of readiness and crew proficiency and demonstrated their ability to provide a flexible and vigilant long-range global-strike capability. Additionally, Polar Roar provided opportunities to synchronize strategic activities and capabilities with regional allies and partners.

B-52s from the 2nd Bomb Wing flew nonstop from Nellis AFB, Nevada, to the North and Baltic Seas, where they conducted intercept training with the Portuguese air force and Royal Canadian air force fighter aircraft, before returning to Barksdale AFB, Louisiana.

At the same time, B-2s from the 509th Bomb Wing at Whiteman AFB, Missouri, flew over the Pacific Ocean to Alaska’s Aleutian Islands, where they practiced intercepts with NORAD-assigned fighter aircraft and conducted inert weapons drops at the JPARC.

In addition to strengthening air crew skills and enhancing familiarity with operating worldwide, missions such as Polar Roar serve to improve Air Mobility Command’s interoperability and capability to enable others to respond to any threat across the globe.