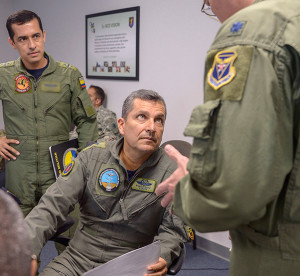 “My takeaway from this exercise is confidence,” Garzón said. “Confidence to share information; to share some ideas during operational execution.”

The scenario of PANAMAX involves a multi-national force involving 19 nations ranging from Canada to Chile to support the fictitious country of “New Centralia” against a guerilla force, which not only threatens that nation’s security but also the security of the Panama Canal.

“If we respond to something around the world in our area of cooperation, if we have partner nations who are able to command and control, it really enables our operation to go further,” said Lt. Gen. Chris Nowland, 12th Air Force (AFSOUTH) commander.

The role of the CFACC is to act as a subordinate commander to the multi-national forces commander, providing airpower into the theater of operations, according to Brig. Gen. Donald Lindberg, Mobilization Assistant to the 12th Air Force (AFSOUTH) Commander. He was paired with Garzón not only during PANAMAX, but also during Exercise KEY RESOLVE in the Republic of Korea earlier this year.

While the air component operates from Davis-Monthan, other components operated from multiple locations around the U.S. as well as in Santiago, Chile.

Working with partner nations during exercises such as PANAMAX provides connective tissue between different countries, which streamlines processes for the future if there is ever a mission where a coalition may be involved.

“It goes back to the partner nation concept,” Lindberg added. “Partner doesn’t mean that the U.S. does everything. We partner with them and they have the opportunity here to get out in front, and have command and control of partner nation air forces.”

More than 35 partner air force officers from about a dozen Western Hemisphere countries participated in the air portion in the exercise, and helped solidify the relationships and bonds which the Airmen of AFSOUTH strive to maintain throughout the year.

“We have demonstrated unity of effort,” Garzón added. “If we are ever called upon, we can work together to accomplish the mission.”