The B-1B Lancer has come home to test in the Benefield Anechoic Facility at Edwards Air Force Base, Calif.

Engineers and maintainers from Edwards have teamed up with testers from around the Air Force to examine the B-1B’s ALQ-161 threat protection system with the goal of improving it to enhance the bomber’s survivability. The ALQ-161 is a receiver/transmitter that detects and identifies threat radio frequencies then applies the appropriate jamming technique to protect the B-1 while on missions.

“The ALQ-161 receives all of the radio frequency energy when it’s flying and will process it and determine if it’s a threat, and then it can set up automatic jamming to jam that RF energy from a missile, aircraft or ground missile,” said Rodney Brooks, 579th Software Maintenance Squadron, out of Robins Air Force Base, Georgia. “The 161 system has been on the B-1B since it was built and we’ve done a lot of improvements in the last 10 years. We’re looking to make some more improvements in the future and we need to collect data from the antennas here in the BAF so we can move forward.”
Data is being collected from directional signal testing, antenna pattern testing and system channel testing. The team is observing how the ALQ-161 responds to signals and what the system is looking at when it sees signals out in the field. The data will be analyzed to see if hardware, software, or both, need to be upgraded.

The BAF, operated by the 772nd Test Squadron, is the largest anechoic chamber in the world and can fit almost any airplane inside. It provides a signal-free space so electronic warfare tests can be conducted without radio frequency interference from the outside world.

“We should be able to get everything out of the BAF that we need. With the antenna patterning we seem to be getting a lot of good data. We will take that data back and see what we need to do with it,” Brooks said.

Carrying the largest payload of both guided and unguided weapons in the Air Force inventory, the multi-mission B-1 is the backbone of America’s long-range bomber force. It can rapidly deliver massive quantities of precision and non-precision weapons against any adversary, anywhere in the world, at any time. Along with its speed and agility, the B-1B’s ALQ-161 is part of a robust defense system that allows it to penetrate hostile airspace. 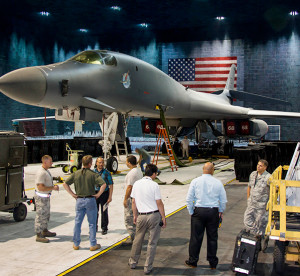 A B-1B sits in the Benefield Anechoic Facility at Edwards Air Force Base, Calif., right after it was towed in July 27, 2016. A team of testers from Edwards, Robins Air Force Base, Ga., and Dyess Air Force Base, Texas, are conducting electronic warfare tests on the B-1s ALQ-161 threat protection system in the BAF, which is free of electromagnetic interference from the outside world.

“Every test here in the BAF is different,” said Hannah Dahlgren, 772nd Test Squadron, project lead engineer. “The cool thing about this test is that the B-1 is the aircraft that the BAF was built for. They decided to build this facility to fix issues specifically on the B-1.”

The BAF was completed in July 1989. The anechoic chamber then commenced its first defensive systems test operations with the AN/ALQ-161A on the B-1B. Electronic warfare personnel used the B-1B aircraft to calibrate the new chamber, determine its baseline performance, verify and validate test procedures, and to prepare its AN/ALQ-161A defensive system for future tests. A dedication ceremony was held Nov. 14, 1990 where the facility was named the Benefield Anechoic Facility in honor of Rockwell chief test pilot Tommie D. “Doug” Benefield who perished Aug. 29, 1984, in a crash of a B-1A.

The BAF has since been used continuously for electronic warfare testing on all types of aircraft, from U.S. Air Force aircraft to allied nations aircraft. The chamber is filled with polyurethane and polyethylene pyramids, radar absorbing material designed to stop reflections of electromagnetic waves. The size of the pyramids, which are painted dark blue or black, varies depending on the particular frequency and test procedure being conducted. Aircraft systems can be tested and verified that they work properly prior to actual flight test.