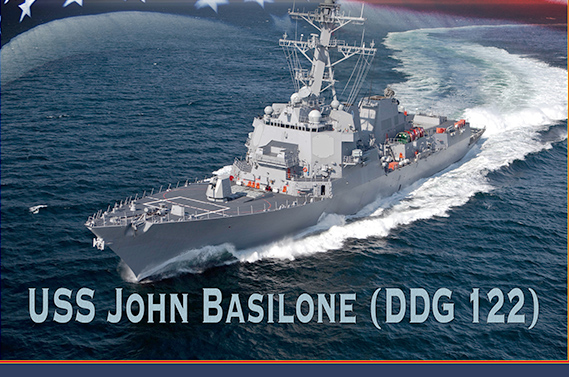 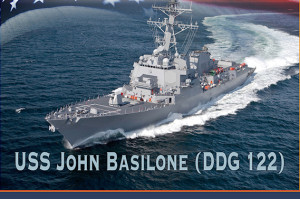 In a ceremony at Marine Corps Base Camp Pendleton, Calif., Secretary of the Navy Ray Mabus announced Arleigh Burke-class destroyer, DDG 122, will be named John Basilone in honor of the Marine Corps gunnery sergeant and Medal of Honor recipient.

This is the second ship to be named for John Basilone. The first USS Basilone (DD/DDE-824) was a Gearing-class destroyer, decommissioned in 1977.

“It is a great honor to name this ship in recognition of John Basilone,” said Mabus. “I have no doubt that all who serve aboard her will carry on the legacy of service and commitment exemplified by this Marine Corps hero.”

Arleigh Burke-class destroyers conduct a variety of operations from peacetime presence and crisis response to sea control and power projection. DDG 122 will be capable of fighting air, surface and subsurface battles simultaneously, and will contain a combination of offensive and defensive weapon systems designed to support maritime warfare including integrated air and missile defense and vertical launch capabilities.

The ship will be constructed at Bath Iron Works, a division of General Dynamics in Maine and is expected to enter the Navy fleet in 2022. The ship will be 509 feet long, have a beam length of 59 feet and be capable of operating at speeds in excess of 30 knots.