Honored by veterans, hospice, Army recruiters
ROSAMOND, Calif.–Soon after the D-Day invasion of June 6, 1944, to liberate a suffering humanity in Europe from the iron boot of Nazi tyranny, the parents of Private First Class John L. Humphrey received that notification that any service family dreads, that their young son was declared Missing in Action.

It turned out that Humphrey, who is now 92 years old, was less missing than that he turned up found by partisans of the French Resistance.

Humphrey, who served with the storied 82nd Airborne Division, turned up in Allied lines a little over a week later after escaping and evading from the enemy while he conducted a reconnaissance that earned him a decoration.

As he threaded his way toward friendly lines across the embattled hedgerow country of Normandy, the 82nd Airborne Division paratrooper who parachuted in to France in the pre-dawn hours of June 6 was carefully noting the map coordinates of Nazi artillery batteries.

His daughter, Mary Buechter of Rosamond, recalled that he was nearly killed by friendly troops attempting to cross back into Allied lines. 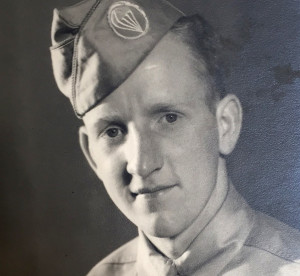 One soldier was supposed to call out “Buck,” and the other was to answer with “Rogers,” a character of American pop culture that it was supposed would be unknown to Nazi enemy troops. The password had changed, but Humphrey managed to re-connect with forces of American paratrooper who had been scattered all over the hedgerow farm country following the largest airborne and seaborne invasion in history.

“I brought the war home with me,” Humphrey said of the shrapnel that lodged in his back.

On Aug. 20, he was awarded the fresh thanks of a grateful nation by two fellow paratroopers, themselves combat veterans of the 82nd Airborne Division.

“It is an honor to provide you with this certificate of appreciation, sir,” Berry said.

It was also so an honor for two paratroopers who entered service years after the 9/11 attacks to be able to meet with a fellow parachutist who served at the dawn of parachute infantry warfare.

“All I ever wanted from the Army was to be able to serve in the 82nd Airborne Division,” Hufragio said. “That was my entire goal.”

Humphrey, who went on to long careers both as an actor and radio personality as well as work in aerospace, said his more modest goal was the extra pay the G.I.s got for volunteering to parachute from perfectly good airplanes into a hot combat zone.

“I wanted the pay,” Humphrey joked. 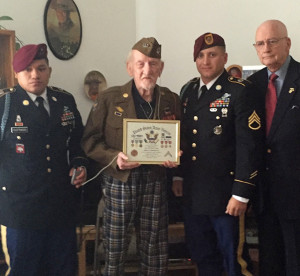 Humphrey, frail but straight in stature, braced his shoulders and stood at attention while his daughter helped him into his “Eisenhower” style World War II dress uniform jacket that displayed his Army jump wings, the Combat Infantry Badge, the Bronze Star, Purple Heart, Good Conduct and World War II Victory medals. He also donned his service cap with the red, white and blue patch of the Airborne.

The ceremony was arranged at the home of Mark and Mary Buechter by Jerry Lawrence, a Marine veteran from the Antelope Valley who does community outreach with ProCare Hospice. Hospice is often misunderstood as anticipating imminent mortality, but that role has shifted in recent years, with some of the focus becoming honors rendered for those who have served their nation.

“I expect to be called home by my Lord soon,” Humphrey remarked.

His son-in-law, Mark Buechter, said, “We hope he will be around for his 93rd birthday, and another 10 years for his 103rd birthday.”

Joined by ProCare Chaplain Jon Wallasky, Lawrence, a Marine of the Vietnam War era, explained that he had volunteered for the hospice for the past several years. He said he wanted to add something to services that specifically honored veterans.

“We needed the active armed services to work with us,” Lawrence said.

He arranged for recruiting non-commissioned officers to assist with presentation of honors.

Lawrence pointed to the young combat veteran paratrooper sergeants from Army recruiting who turned out for the presentation in dress blue uniforms, scarlet berets, and “spit-shined” Corcoran jump boots, whose formal wear are authorized only for those who serve in Airborne assignments.

Lawrence recalled, “I had talked with many of the older veterans, and it was clear that in many ways, many of them felt somewhat forgotten. So, we got to thinking, and we thought, ‘Let’s have a certificate,’ and a presentation.”

Humphrey was surprised, and delighted. His daughter, surrounded by friends and family, called out to her father, “We all love you, ‘Dad!’”

Humphrey responded humorously, “I love you all too!” He added, “I’m a lover!”

Paratroopers from generations of service ranging from the Korean War, through the Cold War, Vietnam and post 9/11 attended, including family friend Vito Canzoneri, an 80-something paratrooper who jumped during the Korean War with the 187th Regimental Combat Team. 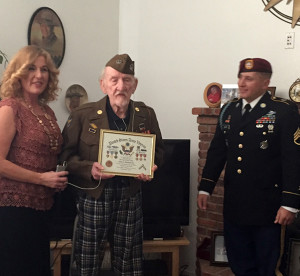 Humphrey’s trip across Europe in 1944 and 1945 took him from D-Day through the Battle of the Bulge, and on to to VE-Day, Victory in Europe. It was never easy. For example, he was wounded on Christmas Eve 1944, and kept getting shifted from aid stations to military hospitals without ever getting a Christmas meal. It’s a detail that soldiers remember.

Still, he added, “It was the greatest adventure of my life.” Humphrey said, simply, “I would do it all over again. I would do it right now, sign up for another trip.”

The two young paratrooper NCOs sat across from him, listening to stories of a long ago war, with training and hardships that anticipated the combat they would one day face in Afghanistan. Across the generations of service, they held in common the traditions of the hard training absorbed by paratroopers of any era of service.

“We got the best training in the paratroopers,” Humphrey said. “Paratroopers are unequalled in their abilities, from that day to this.”

To his younger Army paratrooper counterparts, also combat veterans of the same storied “All American Division,” he said, “It has been an honor to meet you, and a pleasure. And I hope to meet you again.”

He added, “I would do it all again, right now.”