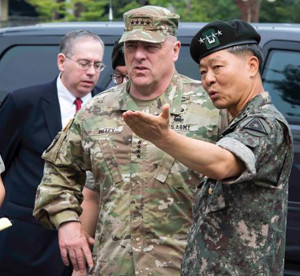 The chief of staff of the Army wrapped up a 10-day tour of the Asia-Pacific region Aug. 23, with a troop visit in Hawaii.

“The Army is a critical part of maintaining stability in the region and your Soldiers are doing a great job throughout the entire region,” Milley told leaders. “From the Jungle school to Pacific Pathways, they are doing a lot to gain and maintain high levels of readiness.”

The Army chief of staff kicked off his Asia tour with a trip to China from Aug. 16 to 17, where he met with the People’s Liberation Army ground force commander Gen. Li Zuocheng and participated in a round-table discussion with researchers at the PLA’s Academy of Military Sciences, the country’s leading defense think tank.

He next travelled to the Republic of Korea, where he spoke with brigade command teams and Soldiers at Camp Humphreys. He also met with U.S. Forces Korea commanding general Gen. Vincent Brooks, observed preparations for exercise Ulchi Freedom Guardian, and received an update from the 2nd Infantry Division/ROK-US Combined Division at the Rodriguez Live Fire Complex Aug. 18., He concluded his South Korea visit with a meeting hosted by his ROK Army counterpart Gen. Jang Jun-Kyu Aug. 19.

While in Hawaii, Milley attended the Na Koa wounded warrior regatta, toured the Hale Koa Hotel, an Army-owned property in Waikiki, and met with the commanders and staff of both U.S. Army Pacific and U.S. Pacific Command as well as Hawaii governor David Ige.

During the trip, Hollyanne Milley, the Army chief of staff’s wife, met with Army spouses and U.S. and multinational counterpart spouses in China, South Korea, Japan and Hawaii to discuss quality of life issues including medical care, education and commissaries.