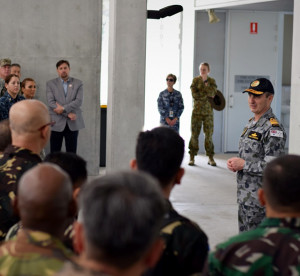 The Pacific Endeavor 2016 exercise is in full swing after it began Aug. 22, and military communicators from 22 Indo-Asia Pacific nations, nongovernment organizations, and academic advisors have come together to focus on improving humanitarian assistance and disaster response in the region.

Based on recent real-world events, Pacific Endeavor 2016 features a scenario based on a Category 5 typhoon striking Brisbane, which requires participants to set up a Multinational Coordination Center and forward deploy to two other locations in the affected area. Their mission is to validate and document high frequency voice and data transfer using ordinary field radios. Commonly referred to as Internet protocol over radio frequency, the practice involves transmitting not only voice, but images and e-mail data over the same IPRF signal.

‘No simulations here’
“There are no simulations here.” said Scott Griffin, director of Pacom’s multinational communication interoperability program. “We’re actually focusing more on real-world-type communications and real-world-type of events, by deploying them out there, setting up their antennas, setting up their radios and then transmitting back.”

Forward-deployed teams set up the forward operating bases at Damascus Barracks and Victoria Barracks, which are far enough away from the coordination center at Gallipoli Barracks that radio operators can truly test their equipment.

“It’s really important to test your high frequency [radios] by having a reasonable amount of distance between the two locations to make sure the systems are properly working,” said Australian Army Lt. Col. Michael King, Australian national lead for the multinational communication interoperability program. “Doing it here on the base allows for that, as well as the other locations around Australia- allow for a more realistic training environment to validate the interoperability between our radio systems.”

Most countries have digital radio frequency capabilities, but not all have satellite, which is the reason this exercise is great for interoperability. The challenges exercise participants encounter provide “hands-on” experience of what they might encounter during a real crisis. 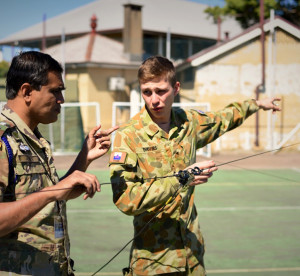 “You’ve always got to prepare for those eventualities, you’ve never going to have everything perfect,” said New Zealand Army Cpl. Daniel Stratton, a radio operator.

With today’s technology, sending images or data over RF signal wouldn’t be needed because of the accessibility of the internet and Wi-Fi. But, when a disaster or humanitarian crisis occurs, that same signal may become a lifeline.

“If you’re at an outside location, and I need you to send me a picture of the damage in a certain location, I can actually see what it looks like,” said U.S. Army Maj. Mitchell Letter, future operations chief with the 311th Signal Command.

Disaster communications
“When a disaster hits, a lot of times everything is wiped out.” said Tom Grant, MCIP technical director. “You might not have any satellite links,” Grant said. “Your cell systems might be down, and you might not have access to the Internet. It’s a valuable skill.”

Nongovernment organization representatives like Catherine Graham, vice president for business development with Humanity Road Inc., highlighted how lessons learned from a recent disaster response in Nepal were integrated into this year’s exercise.

“We can improve how [information sharing] happens in the future,” Graham explained. “The success of them doing their radio tests today will help improve the relaying of urgent needs like medicines and urgent needs for information on the condition of roads, so logistics can be improved.”

Raymond Doherty, U.S. Army Pacific’s data subject matter expert for Pacific Endeavor 2016, said that during the exercise, participants are learning real-world lessons about how they can communicate better, even though they aren’t necessarily using the same equipment or speaking the same language all the time.

Previously, “we’ve always understood disaster response was water, food and shelter, but nowadays with the usage of the Internet and social media, communications is an everyday life function,” Griffin said. “Before someone is asking for food, shelter, or water, someone is asking, is my loved-one safe?”