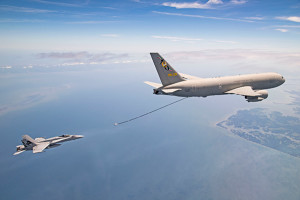 The Italian Air Force’s KC-767A refuels a U.S. Navy F/A-18 E/F during a test in early September at Naval Air Station Patuxent River, Md. This was one of several tests planned to authorize KC-767A refueling of U.S. Navy fighter aircraft in an operational environment.

This six week test period is designed to meet the U.S. Central Command’s operational requirement for joint interoperability and increased air refueling capacity within that area of responsibility.

“It has been great to work with our Italian Air Force partners to strengthen our joint war fighting capability,” said Capt. Jaime Engdahl, U.S. Navy’s Precision Strike Weapons program manager, who oversees the Navy’s aerial refueling efforts.  “With the team’s continuing good work we will be able to clear all of our operational strike aircraft for coalition aerial refueling and extend our combat strike range capability.”

During each flight, the aircraft completes a pre-requisite wake survey before doing initial contacts at a given altitude / airspeed condition.  The aircraft maneuvers to various positions behind and abeam the tanker that correspond to where it would be if actually taking fuel. At each position, the pilot evaluates the relative difficulty of capturing and maintaining the desired position.

Following a successful wake survey, the KC-767A’s hose/drogue is extended and initial contacts with the basket are completed at various altitudes and airspeeds.  Hose reel system response is tested with slow and fast closure-rate engagements to ensure the system will operate at all conditions for operational pilots.

“Testing is going very well and we are encouraged by the results we have seen so far with the F/A-18,” said Erin Kennedy, PMA-201 aerial refueling class desk engineer. “In the weeks ahead, we will conduct additional flying quality evaluations with the AV-8B and EA-6B.”

The goal of the certification testing is to authorize KC-767A refueling of these three aircraft in an operational environment. Testing is scheduled to be complete in early October.