Researchers and engineers showcased a Joint Tactical Aerial Resupply Vehicle, or JTARV, during a recent visit by commanding general of the Army Research, Development and Engineering Command.

The JTARV, a rectangular-shaped quadcopter also known as the hoverbike, could someday make it possible for Soldiers on the battlefield to order resupply and then, minutes later, receive supplies from an unmanned aerial vehicle. In 2013, 60 percent of U.S. combat causalities were related to convoy resupply.

“Those need to be coordinated in advance. This negates the need for all that. Basically what this does is give us speed and agility on the battlefield.” 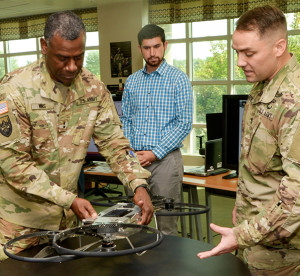 Army researchers envision a future JTARV flying low to the ground or at thousands of feet at speeds of 60 miles per hour or more. With a payload capacity of up to 300 pounds, the vehicle could provide vital resupply at short ranges.

“Anywhere on the battlefield, Soldiers can potentially get resupplied in less than 30 minutes.” said Tim Vong, associate chief of the Army Research Laboratory’s Protection Division. He likened the concept to “Amazon on the battlefield.”

“We want to have options like that,” Vong said.

While the current prototype is electric, researchers are looking at a hybrid propulsion system that may dramatically increase its range. They are also exploring increasing the payload capacity to 800 pounds and extending the range to 125 miles.

“We’re also looking to integrate advanced intelligent navigation and mission planning,” Vong said. “We’re looking to end up with a modular, stable platform that can be used for even more dynamic and challenging missions.”

The laboratory began exploring the JTARV concept in the summer of 2014. They discovered a manufacturer, Malloy Aeronautics, and a systems integrator, SURVICE. The laboratory entered into a contract and quickly moved from concept to full-scale prototypes.

Earlier this year, ARL transferred the program to another RDECOM organization, Army Armament Research, Development and Engineering Center at Picatinny, New Jersey,; however, the lab still serves as subject matter experts on aeromechanics, assessment, analysis, propulsion, intelligence and controls and materials and structures.

“We’re taking a spiral approach,” Vong said. “We’re looking at adding sensors for obstacle avoidance and building a semi-autonomous capability. This will help the craft to avoid obstacles like powerlines, buildings, or trees, he said. It will also allow the vehicle to operate in degraded visual environments.” 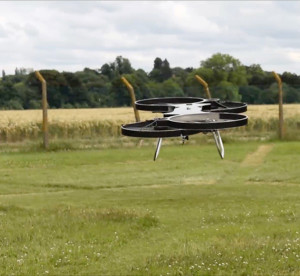 Researchers see a future JTARV flying low to the ground or at thousands of feet at speeds of 60 miles per hour or more. With a payload capacity of up to 300 pounds, the vehicle could provide vital resupply at short ranges.

In June 2016, the Marine Corps joined the program to make it a joint effort.

“I’m very impressed,” Wins said. “It’s my first opportunity to come out to the Army Research Lab. As the new commander, I’m just getting around to all the [Research, Development and Engineering Centers] and the labs.”

The general specifically wanted to be briefed on the JTARV.

“I’m hearing a lot about it,” he said. “I wanted to see what it was all about. It demonstrates to me the high quality of the workforce,” he said. “It also shows what our people are doing and how they’re thinking about the problem of how the Army will fight in the future.”

In addition to many other industry, government and academic partners, the JTARV project is teaming with the Office of Naval Research and Near Earth Autonomy, a company with many employees associated with Carnegie Mellon University, to demonstrate full autonomy in near future.

The general said he plans to make more visits with scientists and engineers across the command.