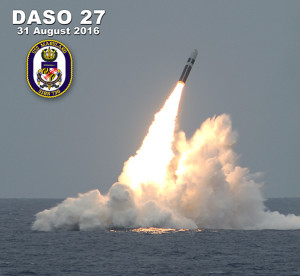 The flight test was an element of a Demonstration and Shakedown Operation (DASO-27) to certify the submarine’s crew and weapon system for strategic outload and patrol. It was the 161st successful Trident II launch since design completion in 1989.

“When it comes to the strategic deterrence mission, the Trident II D5 industry team is focused on enabling the U.S. Navy to deliver credibility and unmatched reliability,” said Eric Scherff, vice president of the Fleet Ballistic Missile program for Lockheed Martin. “We are building on a 60-year partnership with the Navy to ensure Trident remains capable for the decades to come through our shared robust flight test plan.”

Lockheed Martin has a long track record of success in engineering, evolving and sustaining ballistic missile systems. The company has been the Navy’s strategic missile prime contractor since Dec. 27, 1955 – one of the longest government and industry partnerships for a major U.S. weapon system. Lockheed Martin has also continuously supported the U.S. Air Force’s Intercontinental Ballistic Missile mission since 1955.