Virgin Galactic’s VSS Unity took to the skies for the first time Sept. 8.

This is the company’s first test flight since a 2014 accident killed a test pilot.

“Today marks an exciting milestone in our shared quest to open space to change the world for good,” said a company release. “For the first time, a spaceship built by our manufacturing arm, The Spaceship Company, and operated by us at Virgin Galactic has taken to the skies.”

In this configuration, WhiteKnightTwo serves as a veritable ‘flying wind tunnel,’ allowing the highest fidelity method of testing airflow around SpaceShipTwo while simultaneously testing how the spaceship performs when exposed to the frigid temperatures found at today’s maximum altitude of ~50,000 feet and above.

The Sept. 8 flight test was a ‘captive carry’ flight, during which VSS Unity remained mated to the WhiteKnightTwo mothership (VMS Eve) for the entire flight from takeoff to landing.

VSS Unity was piloted by Mark Stucky and Dave Mackay, while VMS Eve was flown by Mike Masucci and Todd Ericson along with flight test engineer Wes Persall. Throughout the entire 3 hour and 43 minute test flight, the flight crew as well our mission controllers and ground crews did the hard work of supporting a crewed test flight of a spaceflight system—great practice for our eventual flights to space. 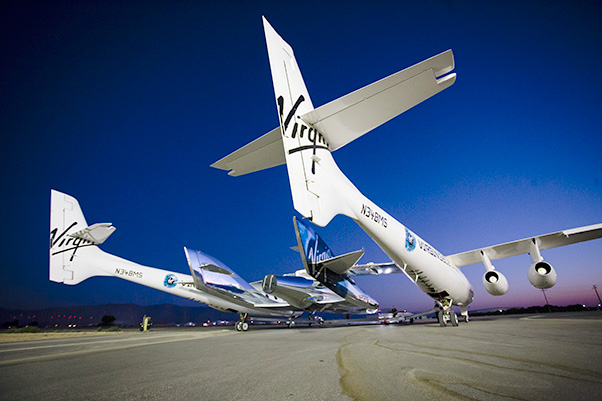 Virgin Mothership Eve (VMS Eve) mated to Virgin Spaceship Unity (VSS Unity) taxis out to runway before taken to the skies for the first captive carry.

“With this flight in the books, our team will now analyze a mountain of flight data, learning what worked well and what could be improved for our next flight test,” said a Virgin Galactic spokesperson. “Only when that analysis is done, along with detailed vehicle inspections, some already-planned work, and potentially more captive carry flights, will we be ready to move into the next phase of test flight.

“Our first flight test was an emotional and fulfilling moment for our hardworking team, even as we recognize how much work we have yet to do. An incredible amount of research, discovery, and iteration has already gone into this program—starting with SpaceShipOne’s initial proof of concept and progressing through the flight test of VSS Enterprise, testing of the raw materials that were used to build our new spaceship, component testing, and most recently the Integrated Ground Vehicle Testing of VSS Unity. The data resulting from today’s flight test will be added to that prior work, helping us make our next flight tests even more efficient, effective and safe.”