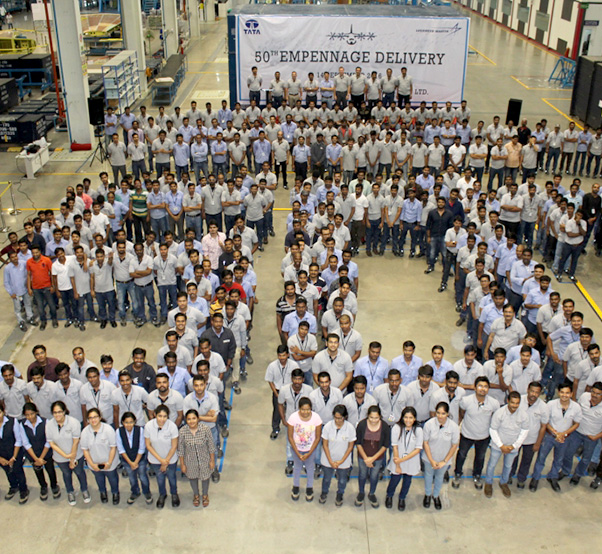 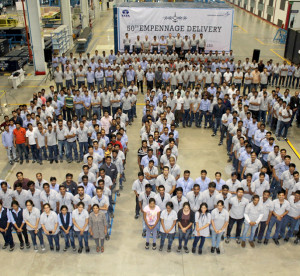 TLMAL was established in 2010, with production of C-130J Super Hercules airframe components beginning in late 2011. TLMAL not only exemplifies the Government of India’s “Make in India” objectives, but it has the distinction of being the single global source of C-130J empennage assemblies included on all new Super Hercules aircraft produced in Marietta, Georgia, in the United States of America.

Empennage assemblies produced by TLMAL include the aircraft’s horizontal and vertical stabilizers along with leading edges and tip assemblies. The TLMAL team also has manufactured 28 sets of C-130J center wing box components that include the front and rear beam assemblies, formers and trailing edge sections.

“It is a moment of great pride and honor for TLMAL, our joint venture with Lockheed Martin, as it delivers the 50th empennage. The joint venture has been a great example of successful U.S. ? India Industrial partnership and a testimony to Lockheed Martin’s and Tata’s intent of developing aerospace manufacturing in India,” said S. Ramadorai, TASL chairman. “I congratulate the Operations team that has ensured all deliveries ahead of schedule to our customer and partner. I am certain that this performance will go a long way in extending our partnership to a new level and help TASL achieve its vision to become the partner of choice for global original equipment manufacturers.”

The C-130J Super Hercules is the proven standard in tactical airlift, providing a unique mix of versatility and performance to complete any mission, anytime, anywhere. It is the current variant of the C-130 Hercules, which has been in production for more than 60 years. More than 2,500 C-130s (legacy models and C-130Js) have been delivered to 63 customers currently operating out of 68 countries. The Indian Air Force operates a fleet of five C-130J-30s and has ordered an additional six Super Hercules.

“As the world’s workhorse, the C-130J Super Hercules is counted on to support missions other airlifters simply cannot do. Quality and reliability are the C-130J’s hallmark and we rely on our suppliers to maintain those attributes. The TLMAL team does exactly this with the empennages and center wing components it manufactures,” said George Shultz, vice president and general manager, Air Mobility & Maritime Missions at Lockheed Martin. “Every empennage we receive from TLMAL is a direct reflection of its team’s dedication to and focus on quality. This milestone is one of many we plan to celebrate with TLMAL and its employees, who literally help the C-130J soar to great heights.”

To date, all 50 empennages and 28 center wing box components have been delivered on or ahead of schedule.

”Our team continues to demonstrate outstanding performance against all of our safety, quality, and schedule and cost metrics,” said Bob Owenby, Lockheed Martin’s Chief Operating Officer for TLMAL. “We could not ask for a better Indian partner in this venture. TASL’s unwavering commitment to success and world-class vision is very impressive and the core of our joint venture success.”