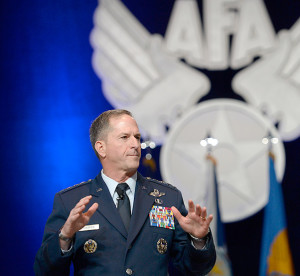 “I’m passionate about the business of joint warfighting and the air component’s contribution to the joint fight and the joint team,” Goldfein said.
Goldfein’s experiences throughout his career have led him to believe the three elements of the strategic vision are foundational.

“If we focus on the (strategic vision elements) over the next four years, it will actually set us up to be able to do the work we need to do as the air component for the joint team and the nation,” Goldfein said.

During his remarks, the general also named the three Air Force leaders who will champion his focus areas.

Revitalizing squadrons
Brig. Gen. Stephen L. Davis will re-evaluate the makeup of Air Force’s fundamental unit, the squadron, and determine what a 21st-century squadron needs to look like, Goldfein said.

“I believe that it is at squadron level where we succeed or fail as an Air Force,” he said.  “It’s where Airmen are developed, it’s where families thrive, it’s where training and innovation occurs and I believe it’s where we make the most difference as leaders.”

Squadrons operated very differently during Vietnam, however the structure hasn’t changed over the last 50 years even with a demand signal that has increased exponentially. According to Goldfein, leveraging the total force may be one way squadrons could see change.

“We’re not talking about taking manpower and money and throwing it at this issue,” Goldfein said. “We have one Air Force with three components that are joined at the hip.”

“The one domain that is central to all of those campaigns is the air component,” Goldfein said. “If you buy into my logic, then you also believe we have got to be a service that can stand up and lead these campaigns.”

Because the Air Force develops Airmen as technical experts first, there is a small window to develop them for the joint fight. Goldfein said that while he was on the joint staff he saw how each component approached and attacked the problem from their unique domain whether it be land, sea or air.

“What I have learned and come to believe is that all those voices need to be at the table … to actually present to the commander in chief truly joint and executable options,” Goldfein said. “This means we strengthen the path … to build joint leaders … so the campaigns of the future are truly joint in nature.”

He also wants to review the way the Air Force sends individual Airmen downrange. While Goldfein understands Airmen will not always deploy as a squadron, he wants Airmen to train, equip, deploy and re-deploy as a team.

“I truly believe that we, as an Air Force, not only get this, but we can be the connective tissue for the joint force as we go forward and move into the information age of warfare,” Goldfein said.

Goldfein said the Air Force needs industry partners to work together because it starts with fundamentally changing the way the Air Force thinks about procurement.

The Air Force uses a multitude of sensors across many domains and Goldfein sees an age where common mission systems, data, architecture and artificial intelligent system fuse the information in a way that provides us decision quality information faster than our opponents, changing the way the future of combined arms operate.

“If we focus on these [areas] we will be ready for the next [campaign],” Goldfein said. “And this is one thing I know with absolute 100 percent clarity, we have from right now until then to get ready and it will take all of us.”