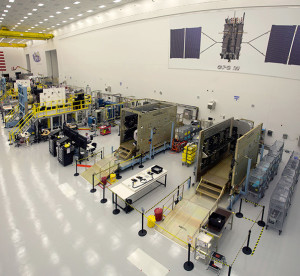 The contract includes funding for both long-lead items and full production for the next two space vehicles (SVs) in the Air Force’s next generation GPS III constellation. The first eight GPS III satellites are already under contract and in production at Lockheed Martin’s GPS III Processing Facility outside of Denver.

“Lockheed Martin is proud to be working with the Air Force to bring GPS III’s tremendous new capabilities to the men and women in our armed forces, as well as to the world,” said Mark Stewart, vice president of Lockheed Martin’s Navigation Systems mission area. “Our industry team, comprising more than 250 aerospace companies across 29 states, is committed to making GPS III a reality.”

The Lockheed Martin team is finishing up final testing and integration activities on the first GPS III satellite, GPS III SV01, and is preparing to deliver it to the Air Force later this year. The second satellite, GPS III SV02, is poised to have its major functional systems fully integrated into one space vehicle prior to starting its own environmental testing. GPS III SV03 also is beginning to take form in the company’s production clean room as its major subcomponents are being assembled.

The GPS III team is led by the Global Positioning Systems Directorate at the U.S. Air Force Space and Missile Systems Center. Air Force Space Command’s 2nd Space Operations Squadron, based at Schriever Air Force Base, Colo., manages and operates the GPS constellation for both civil and military users.