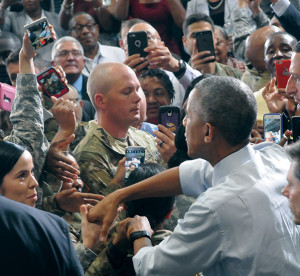 President Barack Obama greets a throng of Fort Lee community members during his visit to the Sustainment Center of Excellence Sept. 28, 2016.

President Barack Obama thanked service members at Fort Lee, Va., Sept. 28, and said the nation will honor its debts to those who serve.

The president also held a town-hall meeting with the troops hosted by Jake Tapper that broadcast on CNN.

“We had an important discussion about how our nation has to uphold its obligations to you and your families,” Obama said. “You serve us with such distinction every day, [and] I want to make sure we’re doing right by you.”

Fort Lee is the home of the Combined Arms Support Command. The president noted that the logistic support that emanates from the post is what makes the U.S. military the best in the world. U.S. troops can deploy anywhere in the world and know they will have what they need, when they need it, thanks to the work of the people at Fort Lee, the president said.

No glory
“You don’t get the glory,” he told the soldiers, “but America’s Army and America’s military … would not be the very best in the world were it not for the best sustainment personnel in the world.”

The president got a good cheer from all the support people when he quoted General of the Army Omar Bradley saying, “Amateurs talk about tactics. Professionals talk about logistics.”

Obama thanked the service members and Defense Department civilians for their spirit. “We have the best military because we have the best people,” he said. “You inspire me and Michelle and the American people, and not as commander in chief, but as an American citizen, I want to say thank you from the bottom of my heart for the work you do.”

He noted that the people at Fort Lee have dedicated themselves to something bigger than self. “You chose a life of service. You stepped forward and volunteered,” he said. “And most of you volunteered in a time of war.”

Deployments
He noted that many have deployed numerous times, and the world is not getting quieter. “You deployed to Afghanistan and Iraq,” he said. “You have deterred attacks on the homeland. You’re helping us destroy [the Islamic State of Iraq and the Levant] — and we will destroy them. You’ve earned your place among the greatest of generations.” 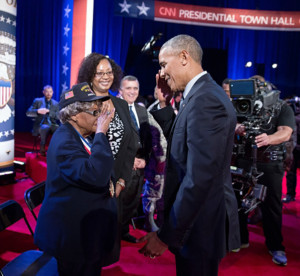 Now America has to uphold its side of the covenant with service members, Obama said. “You took an oath to defend us,” he added. “The rest of us need to fulfill our oath to you.” America also must take care of Gold Star families — those who have lost their military family members to war, the president said.

“The United States must use the military wisely, not by “rushing into war, but doing what is necessary to keep us safe,” Obama said. “It means not playing politics with war. It means giving you the means and support that you need to succeed. It means that when you come home, you are getting the education and benefits you have earned.”

Setting the example
Obama also thanked the service members for setting the example for all Americans. “Especially during an election season, the country seems divided,” he said. “But the truth of the matter is that when you look out at this group, … you are unified in your mission. You do your job. You look out for each other. You lift each other up. You leave nobody behind.

“You remind us that we are one team and one people, and we’re one nation indivisible, with liberty and justice for all,” he continued. “That’s what you stand for. So thank you for your sacrifices, but thank you for reminding the rest of the country what patriotism really means.”