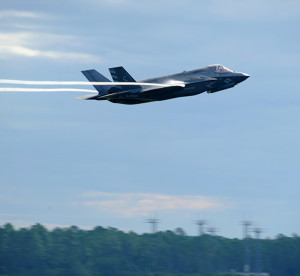 A U.S. Marine F-35 Lightning II from the Marine Fighter Attack Squadron (VMRA) 211, takes off during a 53rd Weapon Evaluation Group Weapon System Evaluation Program from the Tyndall flightline Sept. 16, 2016. This WSEP marked Marine Fighter Attack Squadron 211’s first deployment since standing up the unit on June 30, and was the first operational F-35 firing of a live air-to-air missile (during Combat Archer).

“To be the first operational F-35 unit to test fire is a good feeling, and I know the Marines are really excited about it,” said U.S. Marine Lt. Col. Chad Vaughn, VMFA 211 commander. “There is a lot of discussion about it throughout the F-35 community. I think it is a significant step forward, especially for the pilots, knowing the weapon system works as advertised, and it works so successfully. We got some great data from the guys here at Tyndall and the WSEP.”

While at Tyndall, VMFA 211 brought four F-35s and 112 Marines to complete their unit’s first deployment.

“For our squadron, this was our first deployment,” Vaughn said. “We took a small footprint of Marines, and we had significant challenges in terms of logistics. But it was awesome, it was both a confidence and morale builder as well as motivational for pilots and Marines. It showed the Marines that regardless of how old or young you are that when you shoot a live weapon it is always a learning experience.”

Vaughn, also a pilot, was able to see firsthand the capabilities of the F-35 and its weapon systems in a joint effort between Marines and Air Force while at the WSEP.

“We just saw it today,” Vaughn said. “We did some integration exercise with the F-22 [Raptor], and our awareness of the battlespace especially combined with the F-22 helps out the whole team. This is done not just kinetically, but also non-kinetically. We do a lot via data links and our overall situational awareness — helping to give either the F-22 or legacy fourth generational aircraft better awareness in the air.” 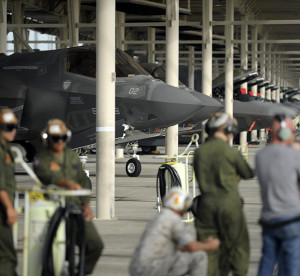 He further elaborated how multi-branch aerial exercises and missions can be more easily completed by how those in the F-35 community have changed their communication style.

“One of the things we have tried to do in the F-35 program is we have taken a joint approach,” Vaughn said. “We fly ‘common airplane’ and have taken a common approach to our tactics and how we speak to each other. This has paid huge dividends. Basically when we go to work with people, whether it’s an Air Force F-16 [Fighting Falcon], F-22or a Marine or Navy F-18 [Hornet] squadron, we are all generally speaking the same language. The point of emphasis for us was that we can work with anyone. Just the nature of this program has made us more compatible.”

As the VMFA 211 is a relatively new unit, designated June 30, 2016, Vaugh closed with the importance of exercises and deployments such as this one.

“One of the things I tell the Marines is that we are a new platform, and we need to learn to deploy,” Vaughn said. “And the only way you learn how to deploy efficiently is to pack up your stuff up and get out there and do it. This was a baby step for us. We have more to come getting the aircraft and the Marines ready to go.” 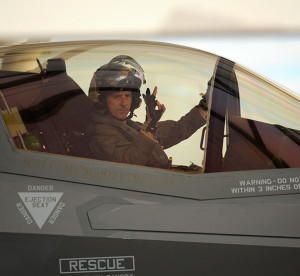 The 53rd WEG is a geographically separated unit of the 53rd Wing, headquartered at Eglin Air Force Base, Fla.