The first B-52H Stratofortress to be resurrected from long-term storage at the Aerospace Maintenance and Regeneration Group [Davis-Monthan Air Force Base, Ariz.] to rejoin the active strategic bomber fleet soared into the sky from Tinker Air Force Base, Okla., Sept. 27, 2016.

The historic flight, which the aircraft is nicknamed “Ghost Rider,” marked the end of the warbird’s 19-month transformation from a mothballed, 55-year-old, eight-engine jet parked in the Arizona desert to a fully updated conventional- and nuclear-capable global strike bomber platform.

“I am extremely proud of the team that was able to deliver Ghost Rider back to Air Force Global Strike Command,” said Brig. Gen. Mark Johnson, the Oklahoma City Air Logistics Complex commander. “This is really a testament to accomplishing the art of the possible. It shows that when there is a common goal, team members from across multiple organizations can rally behind the objective and deliver their team’s full impact to the project.” 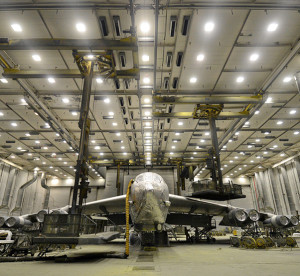 A B-52H Stratofortress spent three days in paint before getting its signature nose art, with the nickname “Ghost Rider,” and returning to the active fleet at Tinker Air Force Base, Okla. Ghost Rider is the first B-52H to ever be regenerated from long-term storage with the 309th Aerospace Maintenance and Regeneration Group at Davis-Monthan AFB, Ariz., and returned to fully operational flying status.

Alley said pilots of Tinker’s 10th Flight Test Squadron flew the B-52 six times to verify system functionality and ensure a safe and reliable aircraft before declaring the plane ready for delivery Sept. 13.

The jet needed an extra 7,000 hours over normal programmed depot maintenance to “get it up to speed with all the other B-52s in the fleet,” Alley said.

“I told people during test flight that because the aircraft sat in the desert so long, we’re knocking all the ghosts out of it,” he said. “It seemed like every time it came back it had two or three different things wrong with it.”

Lt. Col. Darrel Hines, a B-52 flight commander with the 10th FTS, flew the plane from Arizona to Barksdale AFB, Louisiana, in February 2015, and flew in part of the six final functional test flights. The plane arrived at Tinker AFB on Dec. 14, 2015, with overhaul and maintenance work beginning Dec. 31, 2015. The plane was due to be delivered later this year on Dec. 23 but was delivered 90 days early. 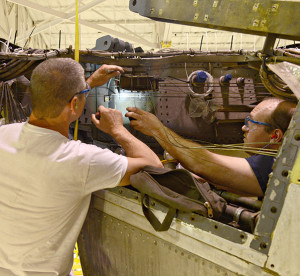 Chris Carson and Martin Harpster, both aircraft mechanics with the 565th Aircraft Maintenance Squadron, work on throttle cable pullies on the right wing of a B-52H Stratofortress at Tinker Air Force Base, Okla. This particular aircraft nicknamed “Ghost Rider” was the first B-52H to ever be regenerated from long-term storage with the 309th Aerospace Maintenance and Regeneration Group at Davis-Monthan AFB, Ariz., and returned to fully operational flying status.

Hines praised all the organizations involved in the restoration, including the 309th AMARG, the OC-ALC, Air Force Life Cycle Management Center, and above all the maintainers whose skilled hands-on work made the difference.

“This was a great team effort from multiple commands and it was a great success,” Hines said. “Now this plane is going to come out of Tinker back to the warfighter, and it’s going to be a huge asset to the guys going out in combat.”

Ghost Rider will join 75 other B-52Hs in the Air Force’s operational bomber fleet.