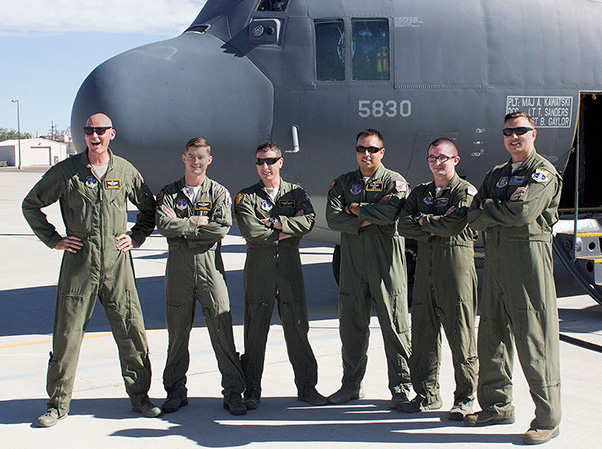 The last active-duty aircrew for the HC-130 P/N King poses for a photo at Kirtland before taking off to bring the plane to Patrick Air Reserve Base, Florida. Crew members are, from left, Maj. Christian Walley, Maj. Sean Bell, Lt. Col. Kit Flanders, Master Sgt. Bobby Martinez, Staff Sgt. Kyle McQuiston and Master Sgt. George Telesh. The King was the last in the active-duty Air Force. Only Reserve and Air National Guard units will use the planes now.

The aircraft belonged to the 550th Special Operations Squadron “Wolfpack” and is the last aircraft the unit had.

The King has been at Kirtland since 1987 and was the last legacy model in the active-duty Air Force.

The HC-130P/N is different from the updated C-130J in that it is the 1965 model and has only four blades on the propellers on engines, compared to the six blades per propeller of the J-model.

The aircraft will continue to fly deployment missions in support of the Air National Guard and Reserves.

“It is a surreal honor to be the last crew (flying) it,” said Maj. Sean Bell, aircraft crew member.

The plane leaving is part of the inactivation of the 550th SOS, which finished training its last student at the end of August. The unit has been sending its other planes away over the summer.