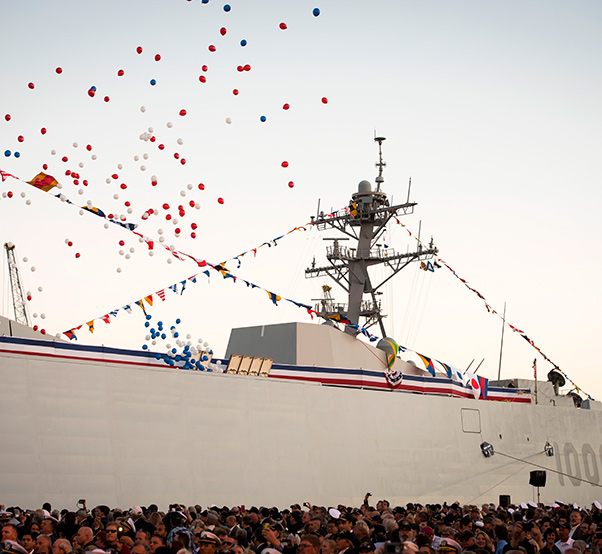 Balloons fly and the crowd applauds as the Navy’s newest and most technologically advanced warship, USS Zumwalt (DDG 1000), is brought to life during a commissioning ceremony at North Locust Point in Baltimore.

The Navy’s newest and most technologically advanced warship, USS Zumwalt (DDG 1000) was commissioned into active service Oct. 15, at North Locust Point in Baltimore.

Secretary of the Navy, the Hon. Ray Mabus, delivered the ceremony’s principal address.

“This ship is an example of a larger initiative to increase operational stability and give the U.S. a strategic advantage,” said Mabus. “Our Navy and our Marine Corps, uniquely, provide presence – around the globe, around the clock – ensuring stability, reassuring allies, deterring adversaries, and providing the nation’s leaders with options in times of crisis.”

The ship’s co-sponsors, Ann Zumwalt and Mouzetta Zumwalt-Weathers, are daughters of former Chief of Naval Operations Adm. Elmo R. Zumwalt, Jr., after whom the ship is named. The sisters were an integral part of the ceremony, giving the order to “man our ship and bring her to life,” in keeping with naval tradition. 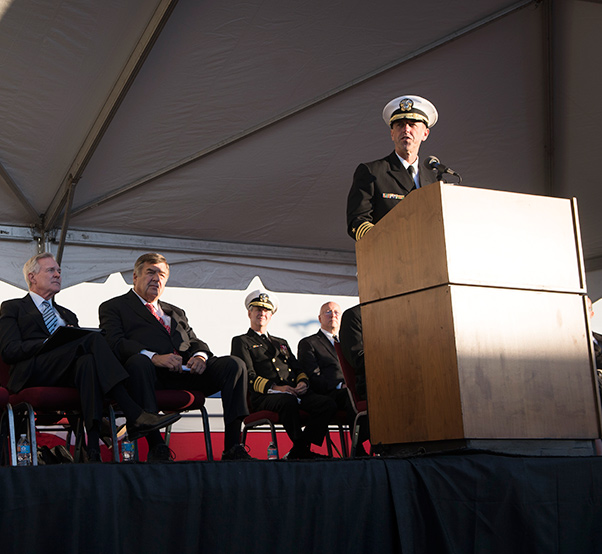 The Zumwalt-class destroyer will be capable of performing a range of deterrence, power projection, sea control, and command and control missions while allowing the Navy to evolve with new systems and missions. It does all of this while maintaining its stealth – making this visually imposing ship difficult to find whether close to the shore or far out to sea.

“Today’s ceremony marked the culmination of over three years of dedication and hard work by some of the finest Sailors I have had the pleasure to lead,” said Capt. James A. Kirk, commanding officer of Zumwalt. “The only thing more impressive than the capabilities of the ship are the capabilities of its fine crew.”

Zumwalt will challenge adversaries and their way of thinking about how we employ our forces, providing an asymmetric advantage. Working with Arleigh Burke-class destroyers, littoral combat ships, and amphibious ships to form adaptive force packages, Zumwalt-class destroyers will use its computing capabilities to make these groups more lethal through increased range, deception, computer integration, and data analysis from various platforms. With its stealth, size, power, and advanced combat systems, this warship will serve as a centerpiece for deterrence and stability in the maritime environment. 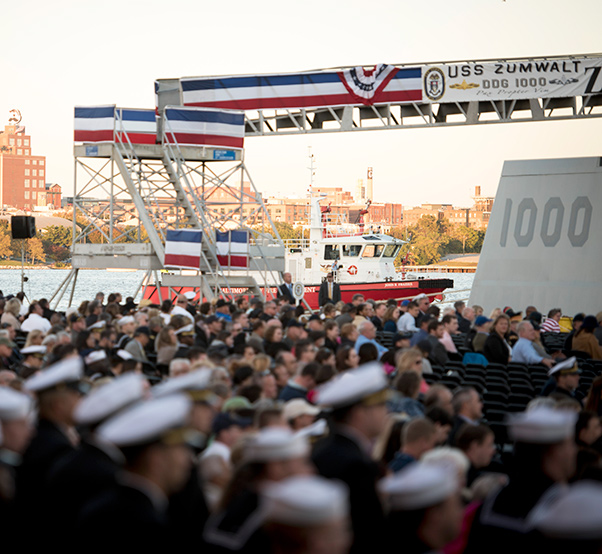 Brewer’s Hill neighborhood of Baltimore can be seen in the background as Secretary of the Navy (SECNAV) Ray Mabus delivers remarks during the commissioning ceremony for the Navy’s newest and most technologically advanced warship, USS Zumwalt (DDG 1000).

“This destroyer, like the others in our fleet, is capable of projecting power, no doubt,” said Mabus. “The Zumwalt-class is much larger than today’s destroyers with a considerably larger flight deck – enough space to operate host Joint Strike Fighters, MV-22 Ospreys, and unmanned systems and a Vertical Launch System second to none.”

In addition to its size, the Zumwalt class will be the first Navy warships to utilize an integrated power system that will produce enough power to run current systems, as well as the power required for future weapons, computing, and sensor systems. Zumwalt generates approximately 78 megawatts of power, almost as much as a nuclear-powered aircraft carrier. This means the ship can operate all of its systems and still generate enough electricity to power a small town, which provides the extra capacity to accommodate future weapons and computing systems. Combined with its size and power, Zumwalt will be able to integrate emerging technologies and new capabilities as they are delivered to the fleet.

USS Zumwalt embodies the legacy of warfighting excellence and innovation of Adm. Elmo R. Zumwalt, Jr., a veteran of World War II and the conflicts in Korea and Vietnam. He exemplified honor, courage and commitment during 32 years of dedicated naval service. Believing it was his job to “modernize and humanize” the Navy, Zumwalt chose to embrace change and to lead it from within.

“I witnessed as he [Zumwalt] transformed our Navy, one Z-gram at a time… removing demeaning and abrasive regulations and moving to eliminate the scourge of racism and sexism from within our Navy,” said Mabus. “Among many initiatives, he opened flight training to women and increased recruiting of under-represented Americans. And, as has always been the case when we open opportunities in our Navy and Marine Corps, we got stronger.” 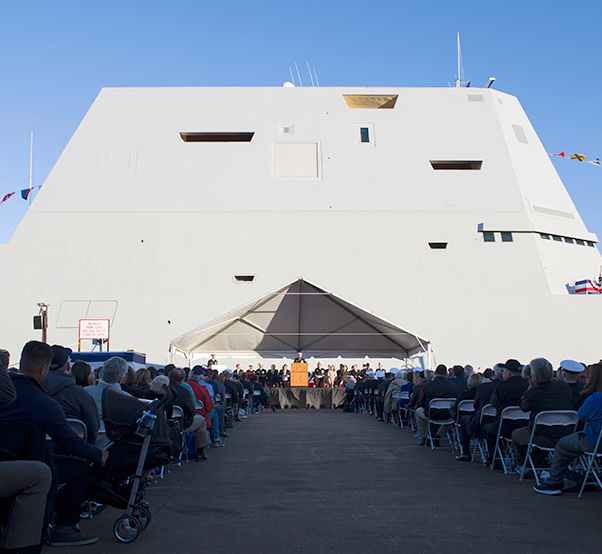 As the nineteenth Chief of Naval Operations, Zumwalt embrace of innovation resulted in a number of successful new programs, including the Oliver Hazard Perry-class frigate, the Ohio-class ballistic missile submarine and the F-14 Tomcat, all of which had lasting impacts on the warfighting readiness of the Navy.

Chief of Naval Operations (CNO) Adm. John Richardson, also spoke at the ceremony, commenting on the significance of the ship’s namesake.

“Admiral Zumwalt, especially during his time as CNO, ensured that our institution lived by its values,” said Richardson. “He was the ‘The Sailor’s Admiral,’ looking at new ideas, acting to the limit of his authorities, and adjusting along the way to make his Navy ready for combat – but also with full cognizance of the impact on the Sailors that made up that Navy.”

Perhaps most importantly, Adm. Zumwalt was a social reformer who recognized the primary force-multiplier of the U.S. Navy continued to be its Sailors, and as such began quality of life improvements throughout the Fleet. He was considered a “thinking officer” who was devoted to Sailors and creating an environment where everyone was treated equally – a legacy that can that can be seen today in the diversity of the fleet. His “one Navy” mentality reminds today’s Sailors that taking care of our warfighters ensures the Navy remains tough, bold and ready. 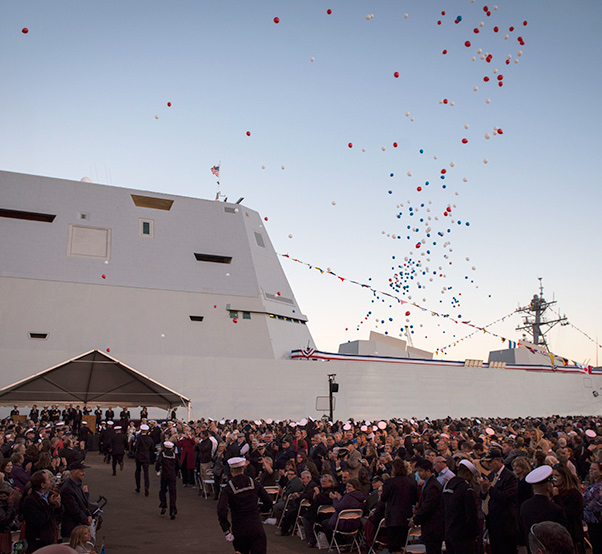 Balloons fly and the crowd applauds as the Navy’s newest and most technologically advanced warship, USS Zumwalt (DDG 1000), is brought to life during a commissioning ceremony at North Locust Point in Baltimore.

“To say the Navy was transformed by Admiral Zumwalt is an understatement. Indeed, every leader on this stage and the great crew standing before us has benefited from Bud Zuwalt’s passion to make the Navy even better,” said Vice Adm. Tom Rowden, commander, Naval Surface Forces during the ceremony. “So today we welcome this revolutionary warship to the fleet. A ship that demonstrates daring design and cutting-edge capability.”

“On behalf of the U.S. Naval Surface Force, I proudly accept ownership of the Navy’s newest ship to the fleet,” Rowden said.

Zumwalt is scheduled to begin her transit to San Diego, making several port visits along the way. Upon arrival in San Diego, USS Zumwalt will begin installation of her combat systems, testing and evaluation, and operational integration with the fleet.

Once fully integrated, Zumwalt’s stealth, power and lethality will provide a vital link from the Navy’s current needs to its future capabilities. 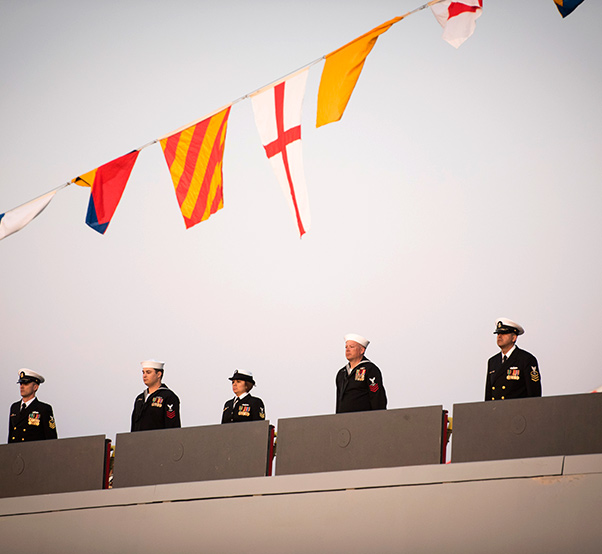 The crew of the Navy’s newest and most technologically advanced warship, USS Zumwalt (DDG 1000), brings the ship to life during a commissioning ceremony at North Locust Point in Baltimore.