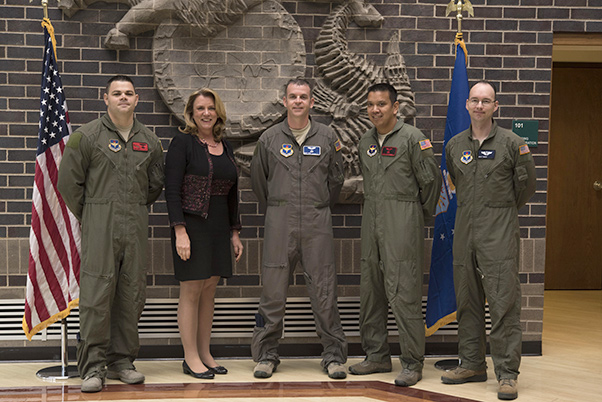 The three master sergeants and one tech sergeant began a class with 20 recently commissioned officers Oct. 12 and will continue their remotely piloted aircraft, undergraduate flight training as a group at Joint Base San Antonio–Randolph, Texas, later this year. Two more groups of four enlisted Airmen, also fully integrated with commissioned officers, will follow the first EPIC students later in the fiscal year.

The Air Force announced the initiative to integrate the enlisted force as RPA pilots Dec. 17, 2015, starting with the RQ-4 Global Hawk.

During her walking tour of the training facilities, James congratulated students on becoming the newest “pioneers” in a career field that is new, vital, and growing.

“The integration of enlisted RPA pilots into RQ-4 Global Hawk operations is part of a broader effort to meet the continual RPA demands of combatant commanders in the field, ensuring they are provided with intelligence, surveillance and reconnaissance capabilities in their areas of responsibilities worldwide,” said James.

“It’s always great when senior leaders come to see what we’re doing on the ground level,” said Master Sgt. Travis, a student in the first enlisted pilot class. “I really like the direction that she shared with us and the direction she wants to go.”

IFT is taught by instructors with a defense contractor and overseen by the 1st Flying Training Squadron in Pueblo under the 306th Flying Training Group at the U.S. Air Force Academy in Colorado Springs.

Editor’s note: Only first names were given because the Air Force limits disclosure of identifying information to first names for all RPA pilots and sensor operators throughout their careers.