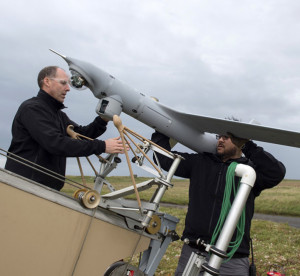 Scott Wiltermood, INSITU demonstration team manager, and Bronson Ignacio, an INSITU demonstration team specialist, mount an MQ-27A Scan Eagle unmanned aerial vehicle to a launcher at Benbecula Rangehead. More than 40 international participants from other navies, industry, academia and research laboratories are in Scotland conducting the first-ever Unmanned Warrior, a research and training exercise designed to test and demonstrate the latest in autonomous naval technologies while simultaneously strengthening international interoperability. Unmanned Warrior is part of Joint Warrior, a semiannual United Kingdom-led training exercise designed to provide NATO and allied forces with a unique multi-warfare environment in which to prepare for global operations.

Luckily, the skies above the island of Benbecula, a remote Scottish outpost in the Outer Hebrides, have been clear and calm so far this October.

While the systems they are here to test may be unmanned or autonomous, the various projects have brought together in Scotland several dozens of the world’s foremost experts in unmanned technology for the two-week exercise.

They appeared to outnumber the local population when representatives from the U.S. Navy, led by the Office of Naval Research, joined colleagues from the Royal Navy and various industry and research organizations at Benbecula’s West Camp and Range Head to test unmanned aerial vehicles as part of the first-ever Unmanned Warrior exercise beginning Oct. 8.

Unmanned Warrior is part of Joint Warrior, a semiannual United Kingdom-led training exercise designed to provide NATO and allied forces with a unique multi-warfare environment in which to prepare for global operations.

“The exercise accelerates learning by providing an opportunity for world-class innovators from U.S. and allied navies to collaborate with the private sector and academia in a challenging real-world environment,” Creighton said. “Data products from the remote unmanned systems testing locations are fed into exercise Joint Warrior to enhance naval coalition training.”

The ONR team is partnering with an international contingent of more than 40 participating groups to conduct a broad range of tests and demonstrations on the latest in autonomous and unmanned naval technologies. In so doing, they are simultaneously strengthening international interoperability and partnerships that amplify the efforts to design advanced warfare systems that began decades ago.

“Unmanned Warrior directly supports our Navy’s Design for Maintaining Maritime Superiority by leveraging this high-velocity learning environment to experiment and demonstrate autonomous capabilities side-by-side with the fleet,” said Rear Adm. Mat Winter, the U.S. Navy’s Chief of Naval Research. “Scientific collaboration with allied navies has historically expanded and strengthened partnerships foundational to future coalition operations. This is especially important in the new frontier of naval autonomy, which improves war fighting effectiveness and accelerates the delivery of breakthrough capabilities to our Sailors and Marines in the battle space.” 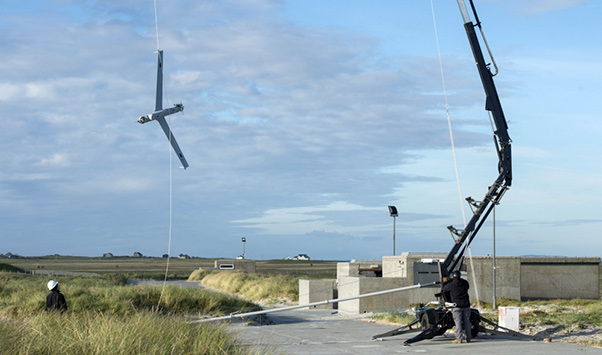 In just a few days after arriving in Benbecula, the U.S. and U.K. navies successfully enabled interoperability between coalition systems to share blue force tracking data and intelligence. The ACV system accurately detected and reported more than twice the number of vessels at sea than the human-only operated missions.

“This capability, with its rapid processing of imagery on board, should increase the speed of warfare significantly,” Wicks said. “The image is processed in seconds, rather than minutes after collection, and we’re generating all the information that is required to target a potential enemy combatant at sea. That’s a real game changer for the U.S. Navy.”

For Bronson Ignasio, of Boeing’s unmanned systems subsidiary, Insitu, the advances made during Unmanned Warrior are the result of years of learning the best practices for implementing unmanned and autonomous platforms on the battlefield, such as the Scan Eagle UAV.

“It all started in 2003, after the invasion,” Ignasio said. “Scan Eagle deployed with the Marines to Fallujah, Iraq where it played a critical role providing air support for troops on the ground and giving ground commanders real-time intelligence to make calls at the same time.”

“At first, Scan Eagle was a more tactical asset,” he said. “We were providing cover for squad-based elements going down the road knocking on doors and providing expanded situational awareness for the guys on the ground. Now, we’re looking for targets or conducting search and rescue operations, conducting simulated man overboard scenarios or looking for potential targets or threats to the battle group.

For smaller companies, the exercise enables them to demonstrate technologies and capabilities in a larger setting alongside defense industry giants.
AutoNaut Ltd. is a micro company with only 10 employees. Dan Aldis, currently demonstrating the AutoNaut unmanned surface vehicle (USV), said it is designed to deliver persistent offshore data capture in support of anti-submarine warfare using a unique wave propulsion system. “Participation in Unmanned Warrior gives us the opportunity to work alongside larger partners in industry such as Boeing and QinetiQ,” Aldis said. 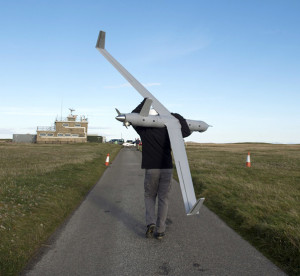 Unmanned Warrior is providing opportunities for collaboration across the board, which the exercise leads agree will strengthen coalition capability for future operations.

Cmdr. Peter Pipkin, the Royal Navy’s fleet robotics officer and the UK’s driving force for planning and coordination of Unmanned Warrior, said the unique gathering of international naval warfighters with unmanned system experts has been an environment conducive to considerable synergy.

“Where else can you harvest the diversity of technology and problem-solving approaches that each team brings to the maritime autonomy challenge?” Pipkin asked. “I witnessed the rapid evolution of unmanned systems in real-time as needs flowed from the fleet to scientists, to software engineers and back again, in days instead of months or even years. Our partnership with the U.S. Navy and ONR remains a cornerstone for the path ahead of us.”