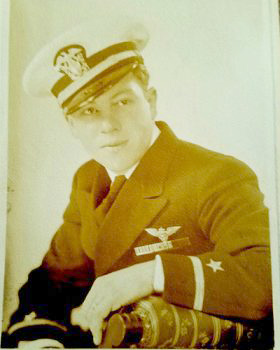 “I remember everything, all of it. … Just like it happened yesterday.”

That’s what a witty and alert Melvin Heckman, a 92-year-old Pearl Harbor veteran, told me when I asked him about his memories from the “date that will live in infamy.” And remember he did, from the amount of water in the fire truck he operated that morning to the breakfast he never got to eat.

Heckman lives in his native Sheridan, Wyoming. When I talked to him about his experiences from that day, 75 years ago, when America was ushered into World War II, the vibrancy he exuded was palpable, and it was obvious he was passionate about keeping his story alive.

The first plane
Heckman, a Navy aviation machinist’s mate, was stationed on Ford Island when the attacks occurred. He usually spent his days repairing airplanes at one of three large hangars, but on Dec. 7, 1941, the 18-year-old was instead assigned duties at the island’s firehouse.

“I woke up that morning ready to take a shower, shave and go to work, and I got a cup of coffee and some donuts,” Heckman remembered. “I was standing in front of the firehouse getting instruction from the fire chief. … While we were being told what to do, the first plane came over.”

The firehouse ended up being a key target for the Japanese to knock out communications between the South Pacific Fleet and the mainland.

“We had an antenna that stretched from the tower of the firehouse to the smokestack of the power house,” Heckman said. “The first plane that came over came over the top of the firehouse and cut that antenna with his propeller. He was 50 feet away from me, because that’s all the tower was — 50 feet high. That’s how low he came.” 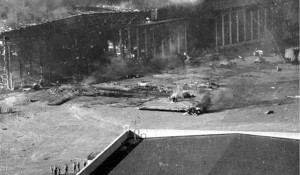 An aerial view of building 130, an airplane hangar that was destroyed by Japanese bombs on Ford Island.

Bomb drops, more close calls
Heckman said he sprang into action immediately, and his memories of what happened next were vivid.

“We started the engine of the fire truck, because that same plane that cut the antenna dropped a bomb on one of the hangars, and it exploded. We were on our way to put that fire out when the plane came behind us. … He dropped a bomb. I yelled at the chief who was driving the truck and told him to step on the gas, and he did,” Heckman remembered. “That bomb landed just 20 feet behind us. When that exploded, it left a hole in the highway big enough to put a small car in it.”

Rescuing the Arizona’s men
The explosion also damaged the fire truck’s hose, leaving them with little water to actually fight the fires. So the chief sent them to stand watch over some buildings on the other end of the island, right beside where the USS Arizona was moored. They watched that battleship take four direct hits — a surreal experience.

Heckman and his colleagues helped pull as many sailors as they could out of the water. 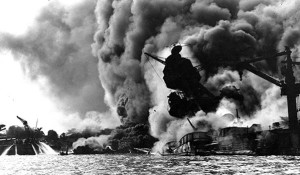 The USS Arizona burns after being hit by a Japanese bomb while U.S. sailors aboard the neighboring USS Tennessee spray fire hoses to force burning oil away from their ship during the air attack on Pearl Harbor, Hawaii, Dec. 7, 1941.

“There was one man who asked for help. I reached and got his hand. I pulled him up, thinking I would take him up on the island, and when I got him out of the water, I looked, and nothing beneath his belly button was there. Everything was gone,” Heckman remembered. “I held him there for about two minutes until he passed away, and then I let him slide back into the water. I guess that’s his grave.”

Heckman never found out who that man was.

Aftermath
The Arizona remains at the bottom of Pearl Harbor to this day, marking the final resting place for 945 men who never escaped. When the bombings stopped, there was repair work to do, rescues to make and warnings of another invasion to worry about.

“We were up night and day, waiting for the Japanese to come back. It was Wednesday before we realized they weren’t coming,” Heckman said. “We had a lot of work to do to try to get some kind of organization. We were issued rifles and gas masks, because we had no idea what was going to happen. That went on for the first 10 days.”

No time for contemplation
Heckman was burned by the explosion behind his fire truck and spent two weeks in a local hospital before being shipped off to the Palmyra Islands in the North Pacific. He earned the Purple Heart for his actions.

As for the enormity of what had happened, he said he and the other men simply didn’t have time to process how they felt.

“We snapped back into well-organized fighting machines right as soon as the first plane came over. We went right into action, and we never stopped until the war was over,” he said.

Heckman left the Navy in 1946. In the years after the war, he got married, had three kids and bought a 640-acre ranch on which he raised cattle until he retired. His daughter, Joanne, said he’s suffered panic attacks for decades, likely because of the war, but he’s learned to get help for them. 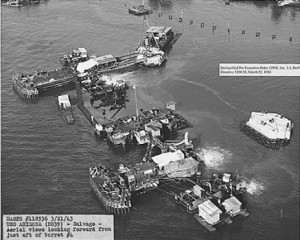 This photo is one of a collection of photographs of salvage operations at Pearl Harbor Naval Shipyard taken by the shipyard during the period following the Japanese attack on Pearl Harbor, which initiated U.S. participation in World War II.

Heckman currently lives alone with the aid of full-time nurses, but he’s still very active in the veteran community. He’s been the keynote speaker at several organizations’ events, and he takes part in parades in his small town.

“I carry the Pearl Harbor flag. One of my grandsons leads the parade with the American flag,” he said.

75 years later
Heckman’s children and grandkids will be joining him when he returns to Pearl Harbor in December for the 75th anniversary of the attacks. He’s excited to show them where the war started.

“I will just be glad to be with my family,” Heckman said.

And who knows — while he’s there, visitors might just see him snooping around for that breakfast he never ate.

“I never did get my coffee, and I don’t know what happened to my donuts. They’re probably still there somewhere,” he joked. 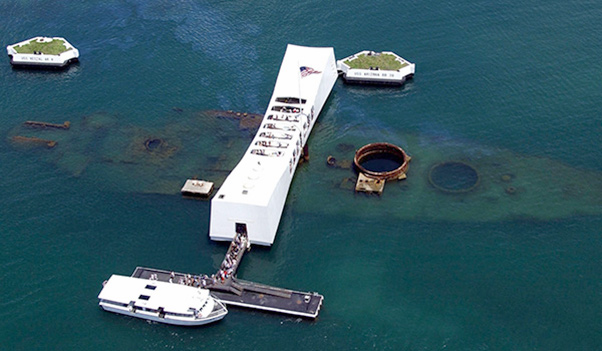 An aerial view of the USS Arizona Memorial with a US Navy Tour Boat, USS Arizona Memorial Detachment, moored at the pier as visitor disembark to visit and pay their respects to the sailors and Marines who lost their lives during the attack on Pearl Harbor on Dec. 7, 1941.