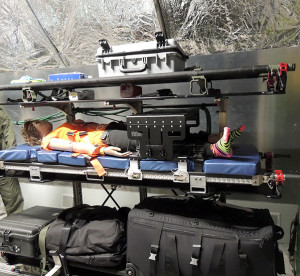 Cornerstone Research Group’s aeromedical evacuation stretcher is shown during a compatibility test on a KC-135.

Scientists with the U.S. Air Force School of Aerospace Medicine are playing an important part in the testing and evaluation of a novel aeromedical evacuation stretcher designed to safely transport traumatic brain and spinal injury patients in air and ground vehicles.

Ohio-based Cornerstone Research Group developed the stretcher, which has applications across multiple services within the Department of Defense.

“Having adequate spinal immobilization is very critical when transporting patients with these types of injuries. Our wounded warfighters experience a much rougher ride back to definitive care than we experience stateside,” explained Dr. David Burch, a biomedical engineer from the 711th Human Performance Wing, School of Aerospace Medicine, Aeromedical Research Department.  “Military medical transport relies on vehicles of opportunity, which were never designed to provide a smooth ride. There is a lot of vibration and perturbation from turbulence or terrain gets transmitted to the patient, making adequate fixation necessary to prevent further neurologic damage.”

Cornerstone Research Group and USAFSAM entered into a cooperative research and development agreement in fiscal year 2013 for the testing and evaluation of the new device. Under this agreement, USAFSAM provides experts who have an in-depth understanding of medivac needs and access to C-130 and C-17 High-Bays for ongoing device compatibility testing and evaluation.

“We would not be where we are now without this CRADA,” said Kristin Cable, Team Leader with CRG. “Our goal is to exceed safety requirements for use and safety. Feedback from users and access to the military vehicles for testing has been hugely beneficial.”

CRG began the design of the device under a Phase I Small Business Innovative Research agreement with the U.S. Army. Since military medical evacuation concerns are truly multi-service concerns, there is value in providing a stretcher design that not only meets Army requirements, but also meets the specifications for use on Air Force aeromedical evacuation platforms. Such a design could result in a common stretcher platform between the services, thus eliminating the need to transfer a patient from an Army stretcher (designed for ground transport) to an Air Force stretcher (designed for interface with airborne medical systems) in the field.

The new device, compatible with both ground and air vehicles, also improves several aspects of the stretcher currently being used. First, the new device is rigid, unlike the standard NATO litters currently used, which can bend more than six inches in certain conditions. Second, a specialized mattress pad was added to eliminate bed sores which can cause ongoing problems for the patient. The new device also includes a foot replacement that can absorb shock and vibration while in transit. One of the most important things about the new design is that it meets NATO design standards for loading, altitude and vibration.


As part of the Air Force Research Laboratory 711th Human Performance Wing, USAFSAM is able to provide unique evaluation and test facilities as well as personnel feedback to enhance the design and air vehicle compatibility. The research done under the CRADA is coordinated with the U.S. Army Aeromedical Research Laboratory (USAARL), as part of an overall program run by the U.S. Army.

In addition to the hi-bays, USAFSAM provided access to other military vehicles for compatibility testing, including military ambulances and an AMBUS (ambulance bus). CRG researchers were also able to work with Air Force Centers for the Sustainment of Trauma and Readiness Skills under the agreement.