Dozens of German and American citizens indulged their collective sweet tooth for freedom with thanksgiving and reflection during the reopening ceremony of the Berlin Airlift Memorial at Frankfurt International Airport Nov. 21, 2016.

The renovated memorial honors the Allied air forces who flew from the former Rhein-Main Air Base and delivered more than 2 million tons of food, supplies and candy to the Soviet-blockaded citizens of Berlin between June 1948 and September 1949.

‘Greatest feat in aviation history’
“Gathering here to celebrate the reopening of this historic memorial gives us the chance to pay tribute to all those involved in ‘Operation Vittles,’ or as it has come to be known, ‘the Berlin Airlift,’” said Col. Timothy Stretch, the U.S. Air Forces in Europe and Air Forces Africa Air Force Reserve advisor to the commander. “The Berlin Airlift is truly a symbol of what can be achieved when the goal is clearly defined and the cause is so obviously a just one.” 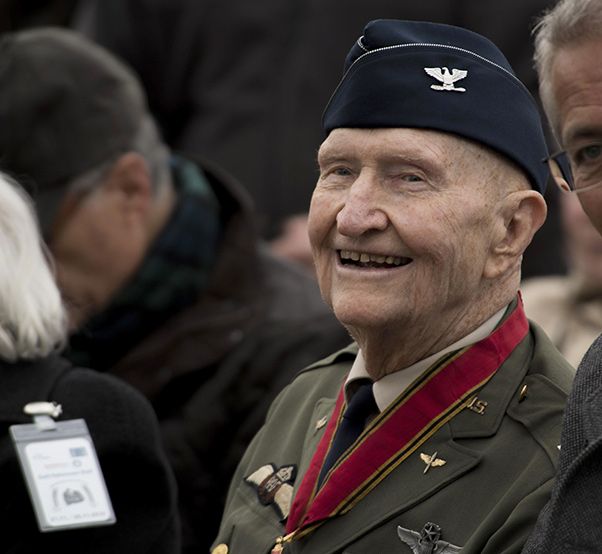 Retired U.S. Air Force Col. Gail Halvorsen, a C-52 Skymaster pilot also known as the “Berlin Candy Bomber,” smiles before the reopening ceremony of the Berlin Airlift Memorial outside Frankfurt International Airport, Germany, Nov. 22, 2016. Halvorsen and his fellow pilots dropped 23 tons of candy with makeshift parachutes from his C-54 as part of the Berlin Airlift, which delivered more than 2 million tons of food to the blockaded citizens of West Berlin between June 1948 and September 1949.

The airlift occurred following the Soviet Union’s decision to stranglehold the flow of supplies to the 2.5 million citizens of Allied-aligned West Berlin, which resided in the middle of then-communist controlled East Germany. The crisis, one of the first tests of the new Cold War era, would take place during the infancy of the U.S. Air Force as its own independent service branch as well during the formation of the democratic West German Federal Republic.

“All members of the United States Air Force are still immensely proud to have the Berlin Airlift as part of our history,” Stretch said. “This memorial is a continuous reminder of the foundations upon which the cooperation between our two great nations have been built and nurtured over many years. We look forward to continuing this valued partnership into the future.”

The jutting memorial beams, which are bookended with a similar structure more than 300 miles away at the former Tempelhof Airport in Berlin, punctuate what was formerly a hotbed of aerial activity during the operation; in which C-54 Skymaster and C-47 Skytrain cargo aircraft took off nearly every three minutes to keep the besieged cities’ stomachs and hopes alive.

“It was one of the greatest feats in aviation history,” Stretch said.

‘It’s a whole lot better feeding ‘em than it is to kill ‘em’
The colonel then added how retired Col. Gail Halvorsen, a C-54 pilot during the blockade and honored guest in the ceremony, and his tying of sticks of gum to a makeshift parachute later avalanched into a gesture of goodwill between two nations. 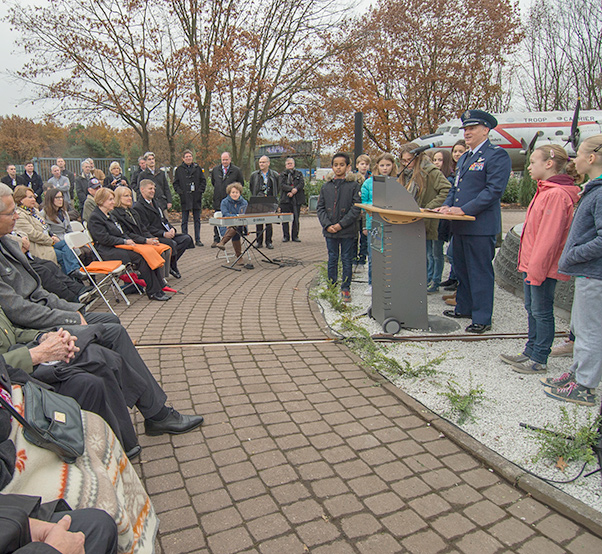 Then-Lieutenant Halvorsen used his aircraft to deliver more than 23 tons of candy to the children of Berlin at schools and hospitals during “Operation Little Vittles.” Word of his sugar-laden heroics soon spread throughout the city, and children soon came to know him as “Chocolate Pilot” or the “Berlin Candy Bomber.”

“You know, the kids then didn’t have much chocolate — very little or none,” Halvorsen said. “Chocolate is a magic word. And we dropped every kind of candy they made.”

And nearly 70 years later, Halvorsen still hands out chocolate at ceremonies like the one in Frankfurt to children of all ages, including Gisela Rainare, who worked at Frankfurt Airport throughout the entire airlift.

“I never got a bar of chocolate when I worked here for the airlift,” said Rainare, as Halvorsen handed her one before the ceremony during their reunion. “And some 60 years later, I meet him again!”

In speaking to the crowd, Halvorsen led with the example set by his fellow Airmen, particularly a close friend whom was killed during the mission. He said he was surprised by his friend’s decision to leave his family and return to the European theater saving people whose armed forces previously shot up his aircraft during the war. 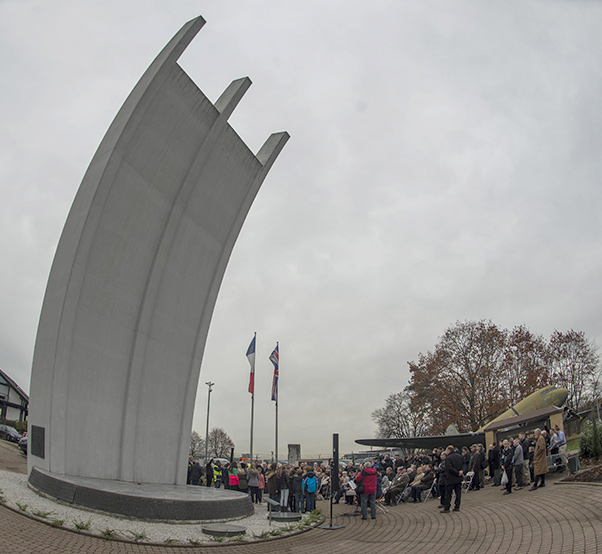 Dozens of Germans and Americans gather for the reopening ceremony of the Berlin Airlift Memorial at Frankfurt International Airport, Germany, Nov. 22, 2016. The memorial, which features a corresponding tower in Berlin, Germany, commemorates the two launchpads for the humanitarian airlift conducted by the U.S. and British air forces.

“He looked a long ways off and said ‘It’s a whole lot better feeding ‘em than it is to kill ‘em, and I’m glad to be back,’” Halvorsen said. “That was the spirit of those at the time; former enemies became friends. Individuals were seen as a person with feelings and not from their leadership in existence with Hitler. So, it was a wonderful feeling of helping a former enemy.”

Halvorsen pointed out how children often followed American Soldiers for the possibility of getting candy, something he said George Washington even did while marching through towns.

“It’s nothing new, but the thing then was new; kids had none, they asked for none, but they were grateful,” Halvorsen said. “Boy, gratitude spans all kinds of things and opens the doors for good things to happen. Gratitude is serving someone else, getting outside of yourself and the little decisions you make in the process that put your footsteps on where you end up, for good or bad. That’s what those kids taught me.”

‘USAFE Airmen are the bulwarks of freedom’
Airmen assigned to the 726th Air Mobility Squadron at Spangdahlem Air Base, Germany, attended the ceremony to greet and thank Halvorsen for his service, which served as the forerunner of the squadron’s current mission of enabling the delivery of war-fighting and humanitarian effects through rapid global air mobility. 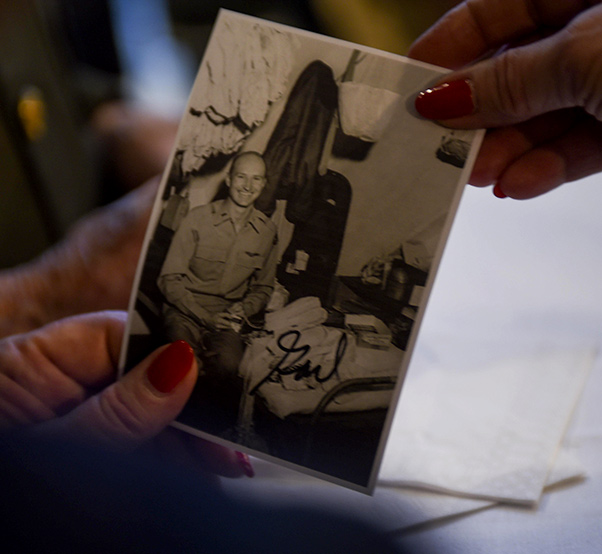 The squadron’s air terminal even features a room named in Halvorsen’s honor, and the squadron’s chapter of the Airlift Tanker Association shares his name since the chapter’s inception a decade ago.

Lt. Col. Christopher Ott, the 726th AMS director of operations, said he was touched by Halvorsen’s continued drive to pass on his legacy.

“I got a true sense of who he really is,” Ott said. “In his book, he said it’s the small things you do that really matter that build up in the end and change your life.”

In the spirit of that first simple act of kindness building to something larger, Halvorsen said he was grateful not only for his reception for what he did during the Berlin Airlift but to continue being an ambassador for USAFE Airmen, who have marked 75 years of airpower superiority.

“Almost 70 years ago, I was part of one of the great teams that flew into Berlin,” he said. “Even today, USAFE Airmen are the bulwarks of freedom.”