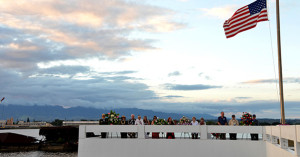 USS Utah survivor Gilbert Meyer (second from far right) stands aboard the USS Utah Memorial during a sunset service on Ford Island. Navy Region Hawaii hosted the event to remember those who served aboard the Florida-class battleship and to honor the 58 crew members still entombed aboard the sunken vessel. Dec. 7, 2016, marks the 75th anniversary of the attacks on Pearl Harbor and Oahu. The U.S. military and the State of Hawaii are hosting a series of remembrance events throughout the week to honor the courage and sacrifices of those who served Dec. 7, 1941, and throughout the Pacific theater. As a Pacific nation, the U.S. is committed to continue its responsibility of protecting the Pacific sea-lanes, advancing international ideals and relationships, well as delivering security, influence and responsiveness in the region.

As the sun slowly sets on the horizon, forming a golden hue in the clouds, Pearl Harbor survivors, World War II veterans and guests, gathered at the USS Utah Memorial on Ford Island, Joint Base Pearl Harbor-Hickam, for a sunset tribute, Dec. 6.

The hour-long ceremony is held at sunset each year to commemorate the anniversary of those who bravely served on the Florida-class battleship, and to honor the 54 crewmembers still entombed aboard the sunken vessel.

“I think it’s important to have a remembrance because we can always learn from those that came before you,” said Petty Officer 2nd Class Robert Rios, of Brooklyn, New York, assigned to Naval Health Clinic Hawaii. “By having an event [like this], you learn from mistakes, learn from traditions and recognize those that went beyond the call of duty, and hopefully twenty years from now, they’ll look back at my generation of Sailors, and see that we had the same core values of those that came before us.”

On Sept. 14, 1941, USS Utah sailed to Pearl Harbor, where it provided anti-aircraft and target duties. USS Utah was moored on “battleship row” when Japan attacked Pearl Harbor on Dec. 7, 1941.

“I think it’s incredible to be standing here, where it took place 75 years ago. It’s unreal knowing that you’re standing where the events took place such a long time ago,” said Rios.

Before his opening remarks, Pearl Harbor survivor Liaison Master Chief Jim Taylor was overwhelmed by the turnout and thanked everyone for showing up. Taylor then went on to speak of the bravery of the men and the toughness they needed to have in order to survive.

“Back in those days, all this grass was beach and water. Can you imagine having to swim?” Taylor asked. “All the survivors on the Utah had to swim all the way out there to a trench near the street all the while being shot at by machine guns. Many had to swim above water and below the water until they made it over there.”

Tania Warnock, granddaughter of David Smith who was one of the crewmembers serving aboard USS Utah on the morning of Dec. 7, 1941, performed a song titled “The Forgotten Ship.”

The Utah was struck by multiple Japanese torpedoes and quickly capsized. The partially submerged hull of the fallen vessel, with the remains of many of her crewmembers, lies silent in Pearl Harbor to this day.

“If we do ceremonies like this, Sailors are more likely to carry these stories to their children because this is 75 years ago. Most of these Sailors are not here anymore, and most of the survivors are not here now,” said retired bandmaster Lt. Cmdr. David Hodge of Kingsville, Texas. “We have to continue the tradition. They served and we tried to embody what they stand for: the loyalty, the honor, courage and commitment, those core values.”

Like the ships of today, the Utah provided valuable service in training naval aviators and enabled the U.S. Navy to test, hone and build its operational capabilities.

“We look to them. We read stories about these guys. Even though they’re running for their lives, they turn around and secure the compartment, they just don’t run away,” said Hodge as he reflected on the toughness and integrity Utah Sailors showed during the attack. “Could I have done that? I only pray I could.”

Despite being located in an area not easily accessed by the public, Sailors still take the time to visit the USS Utah Memorial.

The ceremony concluded with a bugle rendition of “Taps,” played by Hodge, and a wreath floral tribute presented by the ceremony’s official party.

The sunset service is part of a series of remembrance events hosted by the U.S. military and the State of Hawaii held Dec. 1 -10 to honor the courage and sacrifices of those who served Dec. 7, 1941, and throughout the Pacific theater.