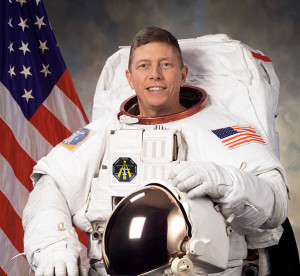 Two astronauts with a combined tenure of almost 50 years in the astronaut corps have retired from NASA. Mike Baker and Mike Fossum both left the agency on Jan. 7 to join private industry.

Fossum first came to NASA as part of a U.S. Air Force detail to support the space shuttle flight operations in 1981, just in time for the third space shuttle flight. He returned in 1993 as a systems engineer, supporting the yet-to-be-built International Space Station, as well as the astronaut office and Mission Operations Directorate. Fossum was also a flight test engineer on the X-38 prototype crew return spacecraft.

In 1998, NASA selected Fossum as an astronaut. Over the course of his 18 years in the astronaut corps, he flew onboard space shuttle Discovery to the space station for STS-121 in 2006 and STS-124 in 2008, and returned aboard a Russian Soyuz in 2011 as part of Expeditions 28 and 29. While in space, he performed seven spacewalks for a combined total of more than 48 hours spent outside the space station.

“Mike Fossum has been a personal friend for over two decades,” said Brian Kelly, director of Flight Operations at NASA’s Johnson Space Center. “His outstanding service to our great nation and NASA has prepared him well for whatever challenges lie ahead. I wish him and his wonderful family all the best.”

Since returning to Earth in 2011, Fossum has served in a number of capacities, most recently as assistant to the chief of the astronaut office for the International Space Station.

Fossum was born in Sioux Falls, S.D., and grew up in McAllen, Texas. He earned a bachelor’s degree in mechanical engineering from Texas A&M University; a master’s in systems engineering from the Air Force Institute of Technology; and a master’s in physical science (space science) from the University of Houston–Clear Lake. He achieved the rank of colonel in the U.S. Air Force before retiring in 1992, and has logged about 2,000 hours of flight time in 35 different aircraft.

Baker was selected as an astronaut in 1985, after spending 10 years as first a U.S. Navy pilot, and then instructor at the US Navy Test Pilot School and the Empire Test Pilot School, earning the rank of captain. Following the Challenger accident in 1986, he participated in a project to modify the space shuttle fleet’s landing and deceleration systems, and improve its safety margins during landing and rollout. He also was involved in the checkout and verification of the computer software and hardware interfaces for the return-to-flight mission, STS-26.

Baker’s first flight came in 1991, when he piloted space shuttle Atlantis for STS-43 and helped put the Tracking and Data Relay Satellite-5 (TDRS-5) into orbit. He piloted a second mission, STS-52, in 1992, when space shuttle Columbia delivered the Laser Geodynamic Satellite II to space.

He followed that up by commanding two missions — STS-68 in 1994 and STS-81 in 1997. For the first, space shuttle Endeavour carried the Space Radar Laboratory. The latter saw Atlantis make the fifth mission to Russia’s Space Station Mir, delivering supplies, experiments and astronauts. 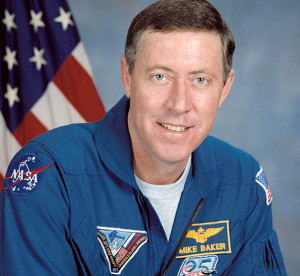 Before his final mission, Baker made the first of what would become many trips to Russia and Kazakhstan. He attended the launch of the Spektr — the fifth module of the Mir — before he made his own trip, and afterward was named assistant director of Johnson Space Center for Human Spaceflight Programs, Russia. In that assignment and the ones that followed, he has attended every Soyuz launch since 1998, as well as the Proton launches that sent the Zvezda and Zarya modules to the International Space Station.

“It’s hard to imagine NASA operations in Russia and Kazakhstan without Mike Baker,” Kelly said. “He has been a part of our work there since the International Space Station came into being. He will be missed, but we wish him well in his next endeavor.”

Baker was born in Memphis, Tenn., and considers Lemoore, Calif., his hometown. He earned a bachelor’s degree in aerospace engineering from the University of Texas in 1975. Over the course of his career, he has logged more than 5,400 hours flying some 50 different types of airplanes, and has made more than 300 carrier landings.