The jets’ arrivals mark the first time the new strike-fighter variant has been deployed to a west coast-based squadron, the recently reactivated “Rough Raiders” of Strike Fighter Squadron (VFA) 125.

“It was my first squadron as a student at NAS Lemoore in 1999, and to re-establish it as the commanding officer makes me tremendously proud of the Sailors and the F-35 program,” said Cmdr. John Turner, commanding officer of VFA-125.

As a multi-role joint strike fighter, the capabilities the F-35C provide go beyond the scope which was previously offered by the Navy’s legacy F/A-18 Hornet and F/A-18E/F Super Hornet platforms.

“The fifth-generation capability of the F-35 stands apart from every other airplane in the world,” said Jeff Babione, executive vice president and general manager of the F-35 Lightning II program for Lockheed Martin. “The F-35 is able to penetrate previously inaccessible anti-access airspace, which gives pilots increased lethality, precision, and survivability.”

NAS Lemoore, the Navy’s designated west-coast strike fighter hub and master jet base, is expected to add more personnel and F-35C squadrons over the coming years. An additional increase in community growth and activity is expected to boost both local demographics and the economy. 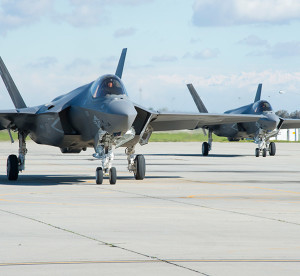 “We enjoy basically unencroached airspace in Lemoore to practice here as we do at sea,” said Capt. David James, commanding officer of NAS Lemoore. “I know that myself, the people on the installation, and the community are very excited to have Lemoore chosen as the site for the west coast F-35 placement.”

Currently, naval aviation has been engaged in sustained combat operations for more than 15 years. Future operations require the enhanced flexibility and power projection the F-35C and its aviators bring to carrier air wings and joint task forces.

“The F-35 is the single largest acquisition program that the Navy has had,” said Turner. “For VFA-125 and Lemoore itself, it establishes our legacy in naval aviation at the west coast’s master jet base. There is no other place that fifth-generation fighters should be.”