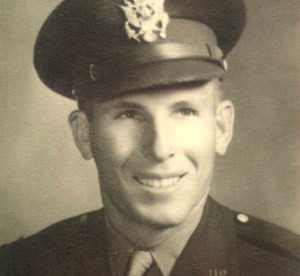 A Date with destiny
The young man looking in the bombsite of his B-24 was focused on his job as his plane was being battered about by enemy fire.

His first mission, as a replacement bombardier on the plane named the Yen Tu, was not what he had expected as he experienced the violent aspect of war.

Flying at a very low altitude was different from the months of his training in a high-altitude B-24 Liberator. He barely knew the names of the crewmen he was flying with that day, for they had only first met just hours before as they made their way to the aircraft on the ramp in the dark of the morning.

Not wanting to let them down, he cleared his head and worked at the job he was trained for — as the rookie, he wanted to earn their respect. The date was Aug. 1, 1943, and, over the country of Romania as part of the daring mission called Operation Tidal Wave, Lt. Russell H. Godde started to call out the bomb run when a violent explosion rocked the plane.

***
Godde stood up as his name was called and started the walk to the front of the auditorium at Antelope Valley High School where he was to receive his diploma.

Girls swooned as the good-looking young man walked on stage, as his buddies made the sounds of mischief. The son of a valley pioneer family that owned hundreds of acres of almond orchards, and with junior college in his future, the world and the Antelope Valley were looking to be his playground. He was the all-American boy many would write books about: born on the farm, he was the sparkle in his mom Anna’s eye and the strapping young man a father could be proud of. A hard worker with the chiseled body of a year-round farm worker, he was the big catch for the local girls and he was liked by everybody that ever met him. His life was shaping up to put him on the road to do great things and live a good life. 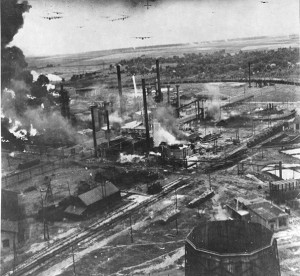 A Sunday morning in a harbor in Hawaii, a date that will live in infamy, changed the life course of thousands of young Americans and their families. Russell was no different. Burning with the desire to get in the fight, the young man who embodied the look of a fighter pilot enlisted and waited for the call to serve. In training, he found out that his destiny was not to fly the planes, but to guide them to their targets. He was not deterred and embraced his training to be the best he could be. The day came to ship out and he embraced his family and friends. The girls were all hoping that after the war, they would be the lucky one to find favor with him and become his wife. With his belongings packed, his feet touched the soil of the Antelope Valley for the last time. He had a date with destiny.

***
Russell knew that the aircraft had suffered a fatal blow, but he continued calling out the bomb run as the plane came apart. The few survivors that managed to bail out alive remembered the last thing they heard on their headsets was Russell’s voice. He stayed at his station till the bitter end, doing what he was trained to do and within a few moments, the promising young man with the bright future came to grips with the fact that his very first mission would be his last. Operation Tidal Wave would add his name to the list of those that would never come home from that fateful day in August.

***
The telegram had made its way to the Godde Ranch. The three letters “MIA” left a window of hope open for his mother and father, and many prayed that the beloved son of a community would maybe show up on a list of POWs.

That would never happen, for as the war ended and the years passed, the quest of his mother faded into old footlockers with the letters seeking a final answer to where her baby had ended up. Sadly, she took that desire to find him with her for the rest of her life, always hoping Russell would come home one way or another.

Somewhere in the countryside or in a church cemetery in Romania, an unmarked grave is the final resting place for this American Hero and Antelope Valley treasure named Russell Godde. Never to touch the soil of our home here again, he is just another one of the many names on a marble wall of remembrance in Europe. His mother’s last request was that if by chance someday he was ever found, that he would be brought home to Lancaster and buried alongside her. Today at Lancaster Cemetery, that plot waits next to a loving mother for him to return.
***
We name schools, parks, buildings and streets, and dedicate statues to honor our beloved veterans and heroes.

Except for a beautiful remembrance at Lancaster Cemetery, the Antelope Valley has not recognized one of our World War II local citizens with this type of honor. I can’t think of a better candidate for this to inspire future generations then Lt. Russell H. Godde, a true American hero. Can we as a community pick up where Anna Godde’s time ran out? Bring home her son — if not his remains, then commemorate his spirit, so that all of us will remember the tremendous sacrifice and what service to mankind with honor look likes and is all about? I think it’s time we roll up our sleeves as a community and complete the mission for that young man in the unmarked grave halfway around the world for his family and friends. Let’s say with a collective voice “We will not forget,” and affirm that Russell Godde is worthy of our best effort in honor of his service, with a community recognition in the Valley he called home.