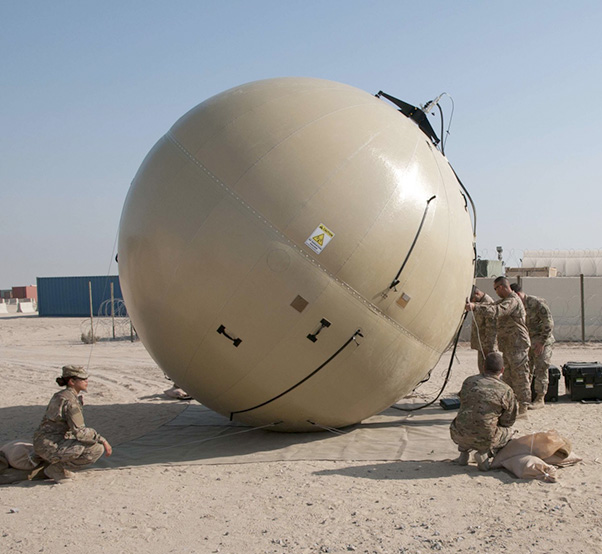 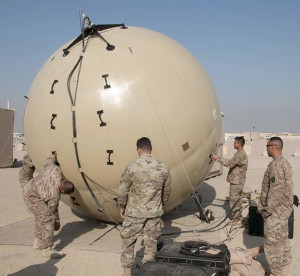 Signal Soldiers of the 369th Sustainment Brigade practice aligning a Ground Antenna Transmit Receive (GATR) Ball at Camp Arifjan, Kuwait on Jan. 10, 2017. The GATR Ball is a portable satellite communications system that can be deployed to remote areas in a relatively short amount of time.

While it may resemble a giant beach ball, the inflatable ground antenna transmit and receive (GATR) ball is actually the Army’s latest piece of satellite communications equipment. The technology is so new that the 369th Sustainment Brigade’s GATR ball has a serial number in the single digits.

Designed to be lighter and more compact than traditional, rigid satellite dishes, the GATR ball can be broken down into just a few cases and hand carried anywhere in the world. The self-contained system can then be inflated and set up in less than two hours, ready to provide a variety of communication services.

“The portability of the GATR system is its key feature,” explained Sgt. 1st Class Brian Horne, the information assurance supervisor for the 369th SB. “It can be set up and operated by a crew of three just about anywhere.”

The mobile nature of the system is not the GATR ball’s only advantage. The system also provides a larger bandwidth capacity, compared to comparable older systems. With more bandwidth, operators can send more data.

In January, signal Soldiers from the 369th SB and other units were trained on the technology, receiving a combination of classroom learning on topics like the electromagnetic spectrum and signal polarization, and hands-on instruction on assembling and disassembling the system.

Sgt. Moises Orta-Castillo, a multichannel transmission systems operator/maintainer for the 369th SB, called the system simple to use and praised its capabilities. “The GATR Ball is capable of more data transfer in a smaller package compared to the traditional satellite systems,” he said.

With effective voice and data communication, commanders can remain in contact with their subordinate elements or units when they are geographically separated from the main command post.

“For the sustainment community, this means that there will only be a small lag time between when supported units become aware of a requirement and when the supporting units can begin satisfying that requirement,” said Maj. John McBride, the signal officer of the 369th SB.

The bottom line, according to McBride, is that the system will help sustainers meet demands sooner than if they were relying on traditional communication assets.