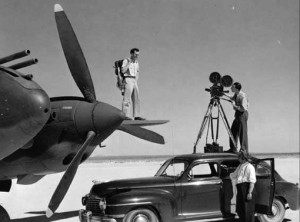 Lightning in the skies!

The Mojave Desert in the summer time is a spectacular place to view the occasional thunderstorms producing the spectacle of Mother Nature with her thunder and lightning symphony and awesome special effects.

These storms have been around since the birth of our planet, but in my article this time it will be about a particular Lightning event that came into being around 1938.

At this month’s Los Angeles County Air Show, Lightning has been forecast to appear and here in the High Desert it will be right at home with Mother Nature’s rival.

Lockheed’s P-38 Lightning has, and always will be, one of the most recognized fighter aircraft of World War II and its connection to the Antelope Valley started when the first production models (YP-38s) started to journey to our deserts in the early 1940s to start the rigorous testing without the prying eyes of the entire San Fernando Valley.

Much like today as we look to the skies to see the current crop of American aircraft development, the desert dwellers of yesteryear were in just as much awe seeing this strange looking sleek aircraft that looked like something out of a science fiction movie. Kelly Johnson and his team at Lockheed took a bold step into the future with this radical design as the fabric covered wings of earlier aircraft faded into the history books.

With its development came many unknowns and as men pushed the plane to its limits the wreckage of many a P-38 ended up on the desert floor; but with test pilots like Ben Kelsey, Tony LeVier, Fish Salmon and a host of other greats, the P-38 Lightning developed into one of the best multi-purpose fighters of World War II.

The Lightning was the aircraft that America’s top two Aces — Richard Bong and Tommy McGuire — flew while downing 40 and 38 aircraft respectfully. The aircraft was also chosen to down Admiral Isoroku Yamamoto, the architect of the attack on Pearl Harbor. The P-38 was the only American fighter built from the beginning of the war until the end. More than 10,000 rolled off the assembly line at Burbank and they served with honor and distinction in Europe, Africa, Italy, The Aleutians, the China-Burma-India theater and every theater in the South Pacific.

To bring this back to our home here in the Antelope Valley: After all the flight testing was over, we had to train young American boys on the operation and combat capabilities of the Lightning and Muroc (now Edwards Air Force Base), with its wide open spaces, was the perfect training grounds.

The citizens of the High Desert were constantly seeing P-38s at all times of the day and night, buzzing the country sides and locked in mock combat high in the sky. This went on day after day for years, and many of those aircraft ended up as causalities on the desert landscape, but the many fighter groups that perfected their airmanship in our skies would take those skills out into a troubled world and along with their trusted P-38 Lightning free the world from oppression. The pictures accompanying this article show the Airmen and their P-38s in training out at Muroc Army Airfield which was a harsh environment in the early 1940s by any measure without very many creature comforts. 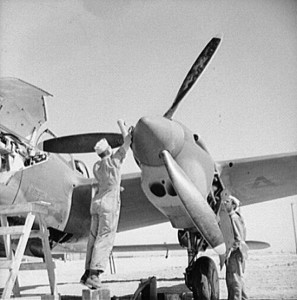 Back to this month’s air show: So the one plane to really seek out will be the Planes of Fame’s P-38 Lightning 23 Skidoo painted in the colors of 11 Victory Ace P.J. Dahl of the 475th FG in the Pacific.

Out of the thousands built, we only have eight flying P-38s left in the world. A rare sight and a moment to share with family and friends of one of the best of American ingenuity and know-how, and the dedication of the men who flew them in combat while earning the title “The Greatest Generation.” 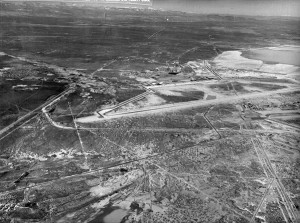 We still look to the skies and marvel at what man is capable of developing and doing but there is also some of us that will bypass the amazing supersonic aircraft and make a bee line at an air show to those old warbirds because there in something magical about big propellers and piston engines.

We are not alone either because that fancy new F-35 on display? Well it just so happens that the nation and its people feel that when a proven product has a cool name why mess with it! So the F-35 will carry on the legacy of Desert Thunderstorms and a P-38 of a long ago battle and will grace the skies as the “Lightning II. So much for lightning never striking the same place twice? In this case I think we can make an exception!

Till next time enjoy the air show and make it a diamond day! Bob out …