Deterring and waging war successfully depends on integrating all domains of warfare, including the space domain, the deputy commander of U.S. Strategic Command said during a space security conference in Washington, D.C., March 22, 2017.

Navy Vice Adm. Charles A. Richard spoke at the Center for Strategic and International Studies, noting that Stratcom’s job is to respond to an increasingly complex geopolitical situation while promoting a peaceful stance among all spacefaring nations.

Doing that job, he said, “compels us to answer the question ‘How do we deter our adversaries in space while keeping it safe, stable and secure?’ We think part of the answer lies in space integration.”

“Whether you’re guiding ships, jets, drones [or] missiles, space is the domain that enables all the others,” he said. “And if we’re going to wage war successfully, we have to respond in all domains, all the time.”

With wars underway in multiple theaters, Stratcom has to determine how to integrate space effects in real time while maintaining timing and tempo across multiple domains if it is to maintain an asymmetric advantage, Richard said. “Command and control is the limiting factor when it comes to synchronizing operations in multiple domains,” he noted.

Part of the solution is the newly integrated Joint Interagency Combined Space Operations Center in Colorado Springs, Colorado, the admiral said. The center facilitates integrated operations across joint forces by serving as a hub for collaboration and experimentation on new space system tactics, techniques and procedures, he explained, and increases Defense Department and intelligence community unity of effort and action to integrate capabilities and enhance space defense.

Leveraging space assets
The National Military Strategy directs Stratcom to integrate on a global scale, and one of the ways that is done is by leveraging the space assets and operating locations of partners and allies, including Australia, United Kingdom, Norway and others, Richard said. 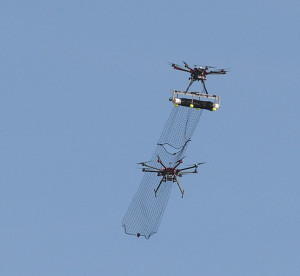 An attack drone with attached net, part of the counter-unmanned aerial system developed by a team from Wright-Patterson Air Force Base, Ohio, intercepts a DJI S1000 drone with its net during the 2016 Air Force Research Laboratory Commanders Challenge at the Nevada National Security Site in Las Vegas, Dec. 13, 2016. Teams had six months to develop a counter-unmanned aerial system to aid in base defense. At a CSIS meeting on space security on March 22, 2017, Navy Vice Adm. Charles A. Richard, deputy commander of U.S. Strategic Command, said space enables all domains and tools of warfare, including ships, jets, missiles and drones.

“The idea is to promote the exchange of information with like-minded spacefaring nations to maintain and improve space-object databases, and to promote the responsible, peaceful and safe use of space and to strengthen cooperation in the global space community,” Richard said.

Stratcom also integrates space operations through exercising and synchronizing its space capabilities with U.S. partners and allies, he added.

These exercises explore what a conflict in space would look like, how it might be fought and how to guarantee control of the environment, he said, as militaries share information, data and resources to leverage and synchronize capabilities.

Addressing issues
One thing the exercises have highlighted is the difficulty at times of determining the appropriate response due to a lack of rules of engagement in space, Richard said. “We’re still sorting out answers to questions like, ‘What constitutes an attack in space? What is the indisputable evidence required within the international community to assert violation of sovereign territory in space? What constitutes provocation in space?’”

He added, “If we’re going to act decisively in real time, we have to address these issues legally and operationally.”

By working to establish and maintain international norms of behavior in space and as it demonstrates a rules-based order with allies, Richard said, the United States will facilitate the free flow of commerce, information and ideas in all domains.

“By building coalitions in space, as in all other domains, with our space-capable allies, I believe we can improve our resiliency tremendously, starting with cultivating and exercising these relationships,” the admiral said.