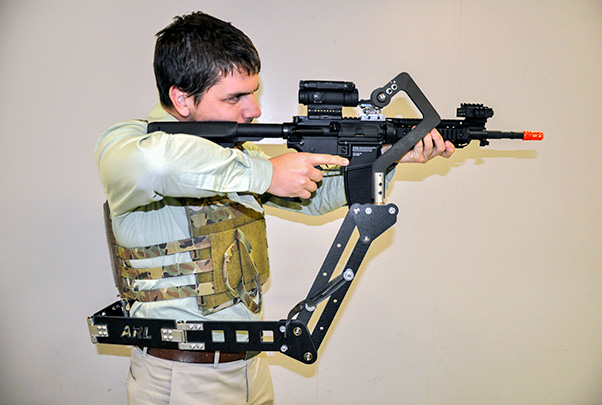 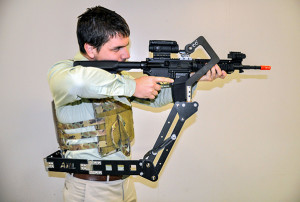 The Army Research Laboratory is developing a “third arm” passive mechanical appendage that could lessen Soldier burden and increase lethality. Weighing less than 4 pounds, the device attaches to a Soldier’s protective vest and holds their weapon, putting less weight on their arms and freeing up their hands to do other tasks.

Future ground troops may one day have a “third arm” device attached to their protective vests that will hold their weapon, lessening the weight on their arms and freeing up their hands for other tasks.

Weighing less than 4 pounds, the body-worn weapon mount is currently undergoing testing at the Army Research Laboratory, where researchers hope the lightweight device will ensure Soldiers pack a more powerful punch in combat.

“We’re looking at a new way for the Soldier to interface with the weapon,” said Zac Wingard, a mechanical engineer for the lab’s Weapons and Materials Research Directorate. “It is not a product; it is simply a way to study how far we can push the ballistic performance of future weapons without increasing Soldier burden.”

Today, some Soldiers are weighed down by combat loads that exceed 110 pounds. Those heavy loads, he said, may worsen as high energy weapons, which could be larger with heavier ammunition, are developed for future warfare.

“You wind up pushing that Soldier’s combat load up beyond 120 pounds and they’re already overburdened,” he said last week at the Association of the United States Army’s Global Force Symposium. “We [now] have Soldiers in their late teens and early 20s and they’re getting broken sometimes in training before they see a day in combat.”

The goal of the third arm device is to redirect all of a weapon’s weight to the body, making it easier for the Soldier to carry a more lethal firearm.

“With this configuration right now, we can go up to 20 pounds and take all of that weight off of the arms,” said Dan Baechle, also a mechanical engineer.

The passive mechanical appendage, which is made out of carbon fiber composite, can be used in the prone position and on both sides of the body.

To test the device, researchers are conducting a pilot with a few Soldiers using an M4 carbine on a firing range at Aberdeen Proving Ground in Maryland. As part of the pilot, Baechle said, the Soldiers wear electromyography sensors on their arms and upper body to measure muscle activity to determine if there’s a change in fatigue when shooting with the device.

Researchers also score the Soldiers’ shots to see if there’s an improvement in marksmanship.

“The research and development we’re focused on now is refining this device,” Baechle said, adding that they’re also working on it with the lab’s Human Research and Engineering Directorate.

Further research will look at answering questions by the Soldiers, such as if the device will get in the way if they wear a medical kit on the side or a magazine pouch in the front. “Those are all future use issues that we’re going to address in future iterations,” he said.

While the M4 is the only weapon currently being tested with the device, Baechle said, they plan to investigate other types of weapons with different calibers, like an M249 squad automatic weapon or M240B machine gun.

“Imagine shoulder-firing either of these without the weight on your arms, and without all the recoil going into your shoulder,” he said.

The third arm could also allow Soldiers to use future weapons with more recoil.

“We could potentially look at very high recoil systems that aren’t going to beat up on the Soldier like they normally would,” he said. 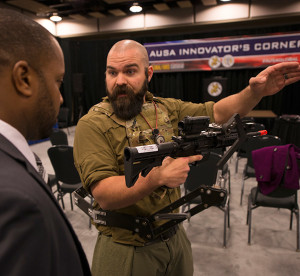 Zac Wingard, a mechanical engineer at the Army Research Laboratory, explains the “third arm” body-worn weapon mount during the Association of the United States Army’s Global Force Symposium in Huntsville, Ala., March 14, 2017. The lab is developing the device that could lessen Soldier burden and increase lethality. Weighing less than 4 pounds, the device attaches to a Soldier’s protective vest and holds their weapon, putting less weight on their arms and freeing up their hands to do other tasks.

Researchers also plan to examine the device’s potential applications for various fighting techniques, like shoot-on-the-move, close-quarters combat, or even shooting around corners with augmented reality displays, he said.

Other possible applications for the device include helping a Soldier keep his weapon close by as he cuts through a barrier with a power saw during a breaching operation. A Soldier might also use it to carry a shield as he leads other Soldiers in clearing a room.

Before any field testing takes place, Baechle said, they hope to “ruggedize” the device to ensure it can withstand rigorous activity, such as having a Soldier fall to the ground with it.

“Right now we’re just doing proof of concept, so we’re not diving into the dirt with our only prototype,” he said. “But that’s something we would want to make sure we can do, because Soldiers will be doing that.”