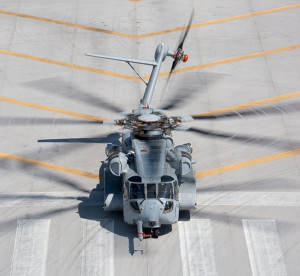 The CH-53K King Stallion returns to the Sikorsky Development Flight Test Center after completing its first gun-fire testing on March 22, 2017.

The Senior Official Performing the Duties of the Under Secretary of Defense for Acquisition, Technology, and Logistics) approved the Navy’s request for the CH-53K King Stallion heavy lift helicopter program to enter into the Production and Deployment April 4.

“We have just successfully launched the production of the most powerful helicopter our nation has ever designed. This incredible positive step function in capability is going to revolutionize the way our nation conducts business in the battlespace by ensuring a substantial increase in logistical throughput into that battlespace. I could not be prouder of our government-contractor team for making this happen,” said Col Hank Vanderborght, U.S. Marine Corps program manager for the Naval Air Systems Command’s Heavy Lift Helicopters program, PMA-261.

Production is expected to begin in June 2017 at Sikorsky’s facility in Stratford, Conn. The recurring flyaway cost for the CH-53K is $87.1M. Recurring flyaway costs are the average cost for all production lots of aircraft, engines, contract/government furnished equipment, and engineering change orders.

With four aircraft in test, the CH-53K has logged over cumulative flight hours to date. Initial operational capability continues on pace for 2019 and is defined as having four aircraft, with combat-ready crews, logistically prepared to deploy.

The U.S. Department of Defense’s Program of Record remains at 200 CH-53K aircraft. The U.S. Marine Corps intends to stand up eight active duty squadrons, one training squadron, and one reserve squadron to support operational requirements.

The CH-53K King Stallion provides three times the heavy-lift capability of its predecessor, the CH-53E. With more than triple the payload capability and a 12 inch wider internal cabin, this increased payload capability can take the form of a variety of relevant payloads ranging from an internally loaded High Mobility Multipurpose Wheeled Vehicle (HMMWV) or the European Fennek armored personnel carrier, and up to three independent external loads at once, which gives incredible mission flexibility and system efficiency.

B-1 Crew Trains with Japan, USS Ronald Reagan in Indo-Pacific