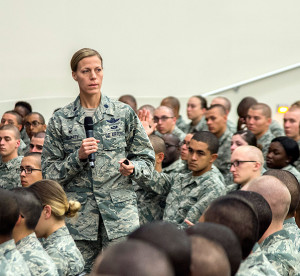 Lt. Col. Meghan Doherty, the 326th Training Squadron commander, addresses Airmen during Airmen’s Week April 3, 2017, at the Pfingston Reception Center at Joint Base San Antonio-Lackland, Texas. Airmen’s Week is a 31-hour, values-based course with a mission to “develop professional, resilient Airmen, inspired by our heritage, committed to the Air Force core values, and motivated to deliver airpower for America.”

After the completion of Basic Military Training, but before Airmen depart for their various technical training locations, lies a relatively new, yet crucial program geared toward the betterment of the Air Force: Airmen’s Week.

Airmen’s Week is a 31-hour, values-based course with a mission to “develop professional, resilient Airmen, inspired by our heritage, committed to the Air Force core values and motivated to deliver airpower for America.”

As the program nears its second anniversary, the Airmen’s Week team reflected on the changes witnessed and the future they strive for.

“We strive to create an environment that ensures the standards taught at BMT are upheld and reinforced, while preparing Airmen for the increased personal freedoms they will have in technical training and, more importantly, the challenges of the Air Force,” she continued. “In the process, we also teach them teamwork, personal accountability, responsible communication and proactive resiliency. The Airmen’s Week curriculum is grounded in the Air Force core values and the Airman’s Creed with a focus on each Airman’s character development.”

Doherty said a graduated class of 700-850 new Airmen are broken down into small groups of 16 and are taught how to apply these foundational principles to real-world situations. At the same time, Airmen’s Week has the benefit of having an adaptable curriculum.

“Through a process that involves the Profession of Arms Center of Excellence program manager, the Airmen’s Week contractor team and 737th Training Group and 326 TRS senior leaders, we can quickly adjust the curriculum to focus on current areas of concern or address trends that are prevalent at technical training or across the Air Force,” Doherty said.

But what Doherty said has truly aided the success of this program is the dedication and excellence of the military training instructors who have been selected to facilitate the curriculum.

After the selection process, MTIs receive additional training to aid them in their new roles.

“The instructors at Airmen’s Week are called MTI facilitators,” said Senior Master Sgt. Benjamin Fitzgerald, the 326th TRS training superintendent. “First, they are seasoned instructors who have already spent 18-24 months as fully qualified MTIs. They then attend a two-week, 72-hour facilitation course, followed by five days of Airmen’s Week familiarization training where they learn squadron-specific operations and rules of engagement.”

With each generation of Airmen bringing new change to the dynamics of the force, the staff at Airmen’s Week is prepared to adapt in order to best serve the needs of the Air Force while striving to instill time-tested values.

“Airmen’s Week must constantly strive to be a program that inspires excellence in our newest Airmen, while preparing them for the challenges of the operational environment,” said Doherty. “As the Air Force adapts, so will we. Foundationally, it will always be a program that is focused on aligning an Airman’s values with the Air Force core values. Airmen’s Week will continue to build critical thinking skills in Airmen and help them become more resilient and self-aware. We want to push them to bring the best version of themselves to the team and mission, every day.”