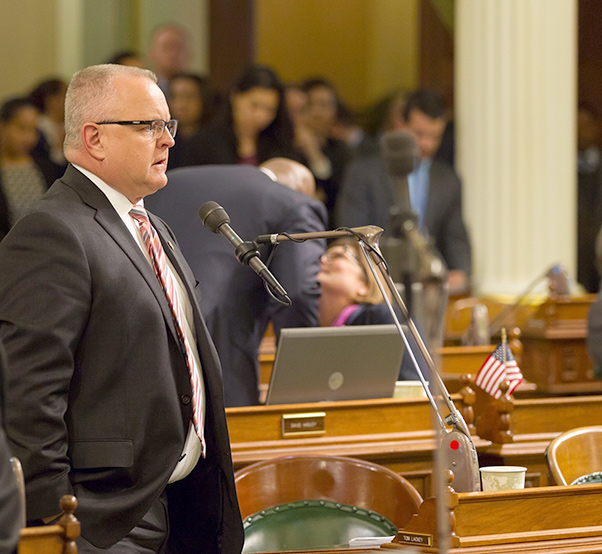 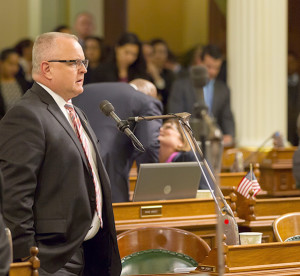 PALMDALE, Calif.–If Assemblyman Tom Lackey’s vision is realized, the Antelope Valley could eventually be home to something like the Lawrence Livermore research laboratory founded by the University of California in 1952.

Lackey, R-Palmdale, who represents the 36th Assembly District, is proposing legislation that would identify the Antelope Valley as the site for a new research institution tentatively dubbed the California Institute for Aerospace.

The Lawrence Livermore laboratories receive massive funding to work on advancing research for the federal Department of Energy, with applications for nuclear weapons and national security research. It remains one of the world’s foremost research institutions. Lackey believes a similar case can be made for establishment of a key research and development institute located in the Antelope Valley, with its rich foundation of high-technology employment and cutting edge aerospace programs.

Lackey said he is working with State Sen. Scott Wilk who, along with state Sen. Jean Fuller, is a principal co-author. Wilk is also an Antelope Valley lawmaker, and Fuller represents east Kern County areas of the Valley.

AB 240 would request UC Regents to “locate the California Institute for Aerospace at a satellite campus in proximity to Air Force Plant 42 or Edwards Air Force Base … so that it will be in close proximity to a large part of California’s current aerospace research and development.”

An effort to get the bill off the ground last year stalled “due to money,” Lackey said. But he is hopeful for more progress in this year’s session of the legislature. He said the lawmakers also intend to seek assistance at the federal level, and are hopeful that Rep. Steve Knight, R-Antelope Valley, who sits on the House defense, and aerospace committees, will find ways to provide federal participation.

“If you look at how Silicon Valley started, it really started as the result of a research institute,” Lackey said. “It’s a proven pathway of partnership between industry and research, and collecting some of the best minds, not just in the country, but the world.”

Antelope Valley College President Ed Knudson said that he and the elected AV College board fully support the legislative proposal. If AV College became a base for the Institute for California Aerospace, it would be on a community college campus that is already providing a baccalaureate program for students headed for aerospace industry employment.

The AV College board, Knudson said, “even passed a resolution supporting it, and pledging affordable facilities for it on campus.”

Lackey served on the Palmdale City Council before being elected to the Assembly in 2014 and was a career California Highway Patrol officer. Raised in the small community of Boron, near Edwards Air Force Base, he said he recognizes how the Antelope Valley is foundational to advancing the technologies of aviation and aerospace.

How the lawmaker envisions such an Institute for Aerospace would be to utilize Antelope Valley College as a home base for bringing in postgraduate researchers from the University of California.

“They could become part of the Antelope Valley, and partner with industry,” he said. “We have the equipment. We have the protected air space.”

The emergence of the civilian spacecraft and space travel industry at the Mojave Air and Spaceport is exemplary of the way the future of the aerospace field is developing in the Antelope Valley, even as major new aircraft programs are in the pipeline at locations involving Air Force Plant 42.

So-called “brain drain” is a concern, Lackey said, citing a conversation he had with Stu Witt, the recently retired director of the Mojave Air and Spaceport.

“We need to keep talent at home,” Lackey said. “All These synergies are unrivaled.”