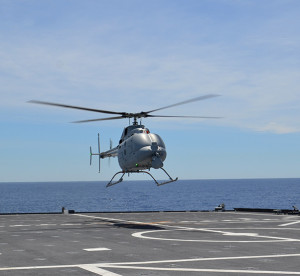 The Fire Scout test team along with Navy Sailors (aboard the USS Montgomery) conducted dynamic interface testing to verify the MQ-8C launch and recovery procedures and test interoperability between the unmanned helicopter and the ship.

“This testing is critical as it provides the flight envelope to safely execute MQ-8C flights from this class of ship,” said Richard Gorman, Fire Scout lead assistant program manager for test and evaluation. “This test puts the MQ-8C one step closer to successfully deploying aboard the Navy’s fleet of littoral combat ships.”

The team conducted more than 37 recovery evolutions over seven days to verify Fire Scout’s capability to operate without degradation from electromagnetic interference, as well as provide pitch, roll and wind limits.

“This test established the MQ-8C Fire Scout as a maritime platform, bringing superior endurance and payload flexibility to the Fleet, bringing capability that  the U.S. Navy will continue to use for many years to come,” said Capt. Jeff Dodge, Fire Scout program manager.

The MQ-8C is a larger variant than the MQ-8B and provides longer endurance (8 hours on station), range (150 NM) and greater payload capability (700 pounds). The Navy approved the “C” variant for Milestone C in early April and will begin initial operational test and evaluation in fall 2017.

Fire Scout complements the manned MH-60 helicopter by extending the range and endurance of ship-based operations.  It provides unique situational awareness and precision target support for the Navy with its ability to detect, identify, track, and potentially engage threats at extended ranges while supporting maritime requirements across the range of military operations.