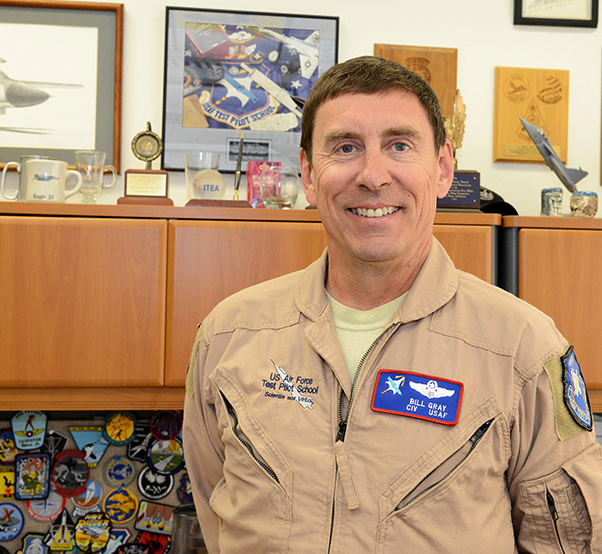 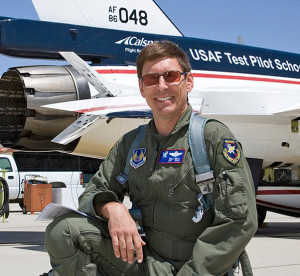 Bill Gray, the chief test pilot at the U.S. Air Force Test Pilot School at Edwards Air Force Base, Calif., has been awarded the Chanute Flight Test Award for a career full of accomplishments by the American Institute of Aeronautics and Astronautics.

The AIAA presents the award to recognize “significant lifetime achievements in the advancement of the art, science, and technology of flight test engineering.”

As the chief test pilot at TPS, Gray oversees flight curriculum development and provides instruction to students and instructors in both aircraft and in the classroom. He also mentors student test teams conducting their real-world test management projects to receive their master’s degrees. Additionally, he evaluates pilot candidates as part of the TPS selection process.

“Personally, the award is enormously meaningful,’ Gray said. “I struggle with being on the same list as luminaries like Howard Hughes, Neil Armstrong and Bob Hoover. When I saw the leadership at TPS jumping through hoops to complete the nomination on time, I was honored by the effort, but I thought they were wasting their time!”

Gray’s accomplishments leading to the Chanute Flight Test Award began immediately after graduating from TPS as a test pilot in 1991. He qualified as a test pilot in the F-15 and T-38, and was the chief pilot for the flight evaluation of seven aircraft that led to the selection of the T-6 Texan II primary trainer. He was later selected as a developmental test pilot for the F-117 Nighthawk. Gray continued to advance the art of flight test as the chief of Test Safety at the Air Force Flight Test Center at Edwards where he was responsible for safety oversight of over 100 test projects per year. His safety regulations formed the basis of those still used today.

After retiring from the Air Force, Gray joined the TPS staff as a civil servant and has been instrumental in producing both flight test professionals and flight test techniques. He developed the world’s first remotely piloted aircraft test pilot school curriculum, conceptualized and developed the first versions of the USAF TPS flying qualities simulator, and created a highly successful comprehensive student screening process.

His military and civilian flying career has encompassed about 6,000 flight hours in nearly 100 different aircraft types and is marked by significant contributions to handling qualities test techniques and flight test safety, along with over a dozen publications supporting the flight test community.

According to his award nomination, Gray’s contributions to the flight test world have produced “ground-breaking advancements to flight test engineering and aviation.” His innovative flight test theories and practices have been implemented by flight test organizations outside of Edwards and validated by researchers around the world.

“My aviation accomplishments primarily reside in the science and technology of flight test. Art-wise I’m a pretty typical test pilot although I’ve been fortunate to participate in some really interesting and meaningful flight test campaigns.”

Being born at the Air Force Academy, Gray was introduced to aviation at a very young age.

“My parents tell me I was the third baby born in the hospital there and I lived there for my first five years. I have distinct memories of seeing aircraft while a young child there. I was assembling and flying balsa models by the time I was in second grade. I was learning how to balance and trim aircraft as soon as I could read the package the models came in. We didn’t have the resources for me to become a pilot prior to joining the Air Force, but that didn’t keep me from learning a lot about flying.”

The Chanute Flight Test Award is presented biennially by the AIAA in odd-numbered years. The award is named after Octave Chanute, a pioneer aeronautical investigator. The AIAA website states the organization is the world’s largest technical society dedicated to the global aerospace profession with 30,000 members.

“I think that my selection for this award is yet another indicator of how aviation has changed in the last quarter century. Prior to modern control technologies and automation, aviation leaps were often enabled by heroic pilot skill and determination. There is no less skill and determination today, they are just hidden behind the scenes in the many outstanding scientists and engineers that create modern aircraft. Pilot skill is becoming less and less important while the effort and skill required to develop an aircraft skyrockets. I am particularly excited to see AIAA award the efforts of an educator. Without vigorous education for the next generations of scientists and engineers, including test pilots, our forward progress will end and our position as a world economic power will fade.”

Gray continues to influence the test community by leading cooperative research with major universities, through AIAA membership and by serving as a Society of Experimental Test Pilots board member.