It’s a measure of the men who are the “Chosin Few” that they all stood when the Marine Corps color guard trooped in with the American flag.

Now all well into their 80’s, as young Marines and soldiers they fought in one of the toughest and most iconic battles in American history — the Chosin Reservoir Battle in North Korea in 1950.

There was a row of wheelchairs and walkers for these men as they gathered here to dedicate the Chosin Few Battle Monument in the new Medal of Honor Theater in the National Museum of the Marine Corps. Yet, when the flag trooped in, they struggled out of their chairs and steadied themselves on their walkers in respect to the flag. Not one remained seated.

‘The toughest terrain’
The chairman of the Joint Chiefs of Staff spoke of that dedication in his remarks. Marine Corps Gen. Joe Dunford knows the story of the battle, as all Marines do. The 1st Marine Division, two battalions of the Army’s 31st Infantry Regiment and British Royal Marines from 41 (Independent) Commando were attacking north, chasing a defeated North Korean Army up to the Yalu River, when an estimated 120,000 Chinese Communist troops attacked and surrounded the force around the Chosin Reservoir.

It was a battle “fought over the toughest terrain and under the harshest weather conditions imaginable,” Dunford said, and Marines since that time have been living up to the example the Chosin Few set in 1950.

“It is no exaggeration to say that I am a United States Marine because of the Marines who served at Chosin,” Dunford said. “In all sincerity, any success I have had as a Marine has been as a result of attempting to follow in their very large footsteps.

One set of footprints belonged to Joseph F. Dunford, Sr. who celebrated his 20th birthday while carrying a Browning Automatic Rifle with the Baker Bandits of the 1st Battalion, 5th Marines in the ridges over the reservoir Nov. 27, 1950. “He spent the night in close combat as three regiments of the Chinese 79th Division attempted to annihilate the 5th and 7th Marines,” the general said.

Growing up, Dunford’s father never discussed how he spent his 20th birthday. “He never spoke of the horrors of close combat or the frostbite that he and many Marines suffered on their march to the sea,” he said. “I was in the Marine Corps for seven years before we had a serious conversation about his experiences in the Korean War.” 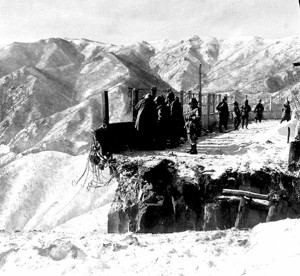 This blown bridge at Funchilin Pass blocked the only way out for U.S. and British forces withdrawing from the Chosin Reservoir in North Korea during the Korean War. Air Force C-119 Flying Boxcars dropped portable bridge sections to span the chasm in December 1950, allowing men and equipment to reach safety.

The legacy of Chosin
Still, even as a youngster, the general knew what pride his father felt in being a Marine and a member of the Chosin Few and vowed to join the force. “I am still trying to get over the bar that he set many, many years ago,” Dunford said.

So, his father was his reason for joining the Marine Corps, but it was another Chosin veteran that was responsible for him making the Corps a career.

Dunford served as the aide to Marine Corps Lt. Gen. Stephen Olmstead on Okinawa, Japan, in the early 1980s. Olmstead was a private first class rifleman at Chosin in G Company 3rd Battalion, 1st Marines. “I would say that to a young lieutenant, there was something very different about General Olmstead — his character, his sense of calm, a father’s concern for his Marines, a focus on assuring they were well-trained, well-led and ready for combat. He knew what they might have to experience.”

Olmstead’s example was a powerful one for young Lieutenant Dunford, and he started to think about making the Marine Corps a career. “I wanted to serve long enough to be a leader with the competence, compassion and influence of General Olmstead,” he said.

The Chosin Few have this effect on the Marine Corps as a whole, Dunford said. Their real legacy is an example of valor, self-sacrifice and camaraderie that units hand down as part of their DNA, he said.

The battle was a costly one, with U.S. forces suffering more than 12,000 casualties — including more than 3,000 killed in action. The nation awarded 17 Medals of Honor, 64 Navy Crosses and 14 Distinguished Service Crosses to Marines and soldiers for heroism in that battle. 41 Commando received the same Presidential Unit Citation as the Marines of the 1st Marine Division.

Young Marines all learn about the battle, from recruits in boot camp to those striving to be officers at Quantico.
Now they have a monument to visit.